This year, CSM was proud to induct 19 women and men, who have distinguished themselves either as CSM athletes or later in their careers, into the Sports Hall of Fame at a banquet held on February 9. 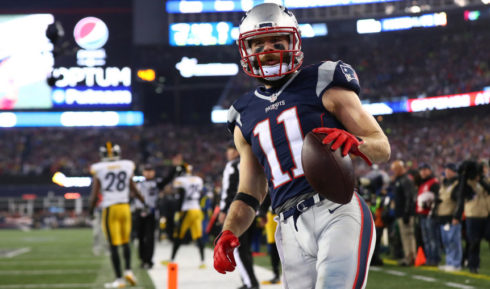 Two-time Super Bowl winner Julian Edelman and Major League Baseball Hall of Fame announcer Jon Miller were among the inductees who were celebrated. Seven players from CSM’s illustrious 96 seasons of football were on the list, joining past inductees/players Bill Walsh and John Madden:

Jon Miller began his broadcasting career as a student at CSM, doing football, basketball and baseball games on KCSM, the college’s radio and TV stations, in the early 1970’s. He was the 2010 Ford C. Frick Baseball Hall of Fame award winner for broadcasting excellence.

He got his first baseball play-by-play job in 1974 at age 22 calling radio and TV for that year’s World Series Champion Oakland Athletics. He was chosen as the first play-by-play announcer on ESPN-TV Sunday Night Baseball game of the week in 1990. Miller is entering his 22nd season as the Voice of the Giants locally on KNBR Radio and NBC Bay Area. He has broadcast 16 World Series. He was inducted into the National Radio Hall of Fame in 2014.

This entry was posted on Friday, February 23rd, 2018 and is filed under Alumni, Athletics, Awards, Baseball, Basketball, Broadcast, Community, Events, Football, Headline, Softball, Swimming, Track & Field, Water Polo. You can follow any responses to this entry through RSS 2.0. You can leave a response, or trackback from your own site.