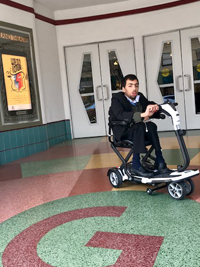 “My nightmares inspired my film,” says Nadar Bahu, a CSM film major. As a child, Bahu lost his ability to walk. His student film, Push Forward, chronicles his struggles to keep going despite being told he could not recover. It is a story of persistence and hope.

Bahu was one of two College of San Mateo student filmmakers selected for a live screening of their films at the Grand Foundation Student Film Festival in March. CSM student Madison Rojas was also honored with acceptance for her film, Hello, Anxiety.

The Grand Foundation Student Film Festival showcases the progressive works of student filmmakers from colleges, film/art schools and high schools in California, Arizona, Nevada, and Oregon. It’s a rare opportunity for young filmmakers to have their film work live-screened by the public and compete for awards. 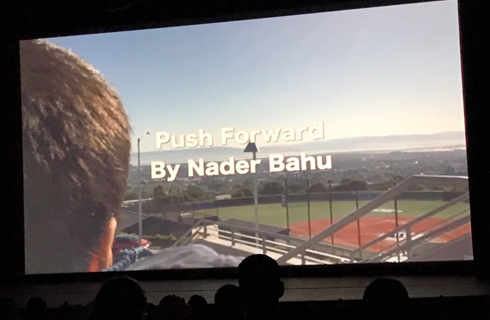 David Laderman, who is the sole full-time film professor at College of San Mateo, emphasizes film studies in the context of popular culture and globalization.  “All our courses are transferable “critical thinking” courses that teach students the language of film from a variety of perspectives,” says Laderman, who has taught at Stanford, SFSU, and UC Davis.

As Laderman reflected on these students’ films being chosen to be showcased, he applauds them for taking the chance and says, “It speaks to the truth within the cliché, you can’t win if you don’t try.  There are lots of opportunities out there for our students; you just have to go for it.”

In 2016, Bahu lost his ability to walk and as he went through the fifth grade, he felt tormented by his aide. The aide pushed him so far that he had nightmares of her telling him he would be alone. The constant distress of being told no one would love him, over and over again, would leave anyone torn. But not Bahu.

“I realized that there are other people out there who might be in this situation, so that is what made me want to make this film. I want to use my painful past to show people that they must keep going no matter what,” says Bahu, who plans on transferring to San Francisco State this fall.

Bahu is thrilled of to be a part of the Student Film Festival, as he feels it is his responsibly to inspire those, through his films, to not give up.

“Honestly? it blows my mind,” says Bahu. “The pain of loneliness, the hurt, and losing so much. I overcame it, and I made it into something beautiful.”

The film program at College of San Mateo leads to an associate’s degree and prepares students for success in their careers and beyond.

“We believe you can learn how to make films by studying them, and that studying them is a creative act,” says Laderman.

This entry was posted on Monday, April 16th, 2018 and is filed under Art, Community, Headline. You can follow any responses to this entry through RSS 2.0. You can leave a response, or trackback from your own site.