The CSM Fire Technology department is honoring the late fire instructor Don Ciucci by naming its new fire engine in his memory. The Fire Academy dedicated the Don Ciucci Training Engine on August 13, 2018. Chief Ciucci’s nephew Chris Wettstein, who also teaches in the CSM Fire Technology program, presented the new engine in his honor. The new engine is a 1999 Pierce pumper that was donated to the Fire Academy by Chief John Kammeyer of the Central County Fire Department. 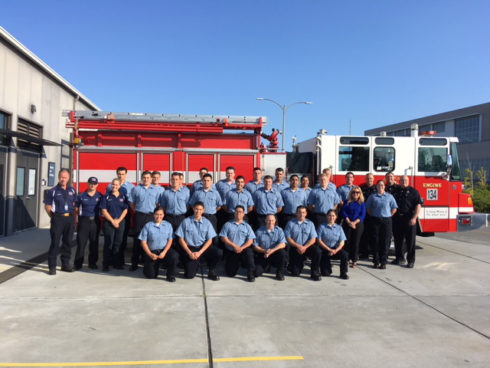 Chief Ciucci passed away on July 21, 2018. He grew up in San Francisco and attended City College of San Francisco and Cal Poly San Luis Obispo, where he earned his BS in city and regional planning. He worked for the Daly City Redevelopment Agency from 1972 to 1979, then joined the Daly City Fire Department. While there, Chief Ciucci earned the Ed Bent Instructor of the Year award and was named 2003 Training Officer of the Year by the California Firefighter’s Association. 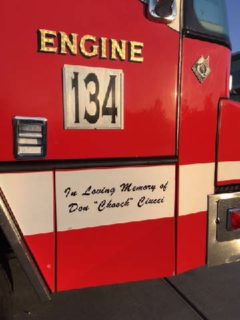 Chief Ciucci retired in 2005 from the fire service as a deputy fire chief. He was instrumental in the hiring and training of hundreds of firefighters all over the state of California, especially San Mateo County. Chief Ciucci began teaching at CSM in 2006, teaching Fire Science curriculum core courses such as building construction instruction and firefighter survival. He also oversaw the in-service academy, a rigorous 15-week program.

“For the future CSM students that never had a chance to meet Chief Ciucci, the engraving on the side of the engine will ensure that he will never be forgotten,” said Christy Baird, CSM Fire Technology instructor/coordinator and captain with the Palo Alto Fire Department.

The newly donated engine replaces the older engine that is being donated to the Woodland Hills Rotary Club. According to Captain Baird, it is destined for a village in Mexico that does not have its own firefighting equipment.

This entry was posted on Friday, September 21st, 2018 and is filed under Headline, Programs. You can follow any responses to this entry through RSS 2.0. You can leave a response, or trackback from your own site.