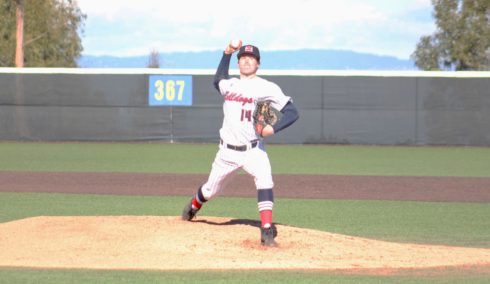 Sean Prozell has been nails through his first two starts of 2019.

And while the College of San Mateo sophomore has yet to record a decision, he was much happier about the outcome the second time around.

Prozell (Carlmont) departed amid a scoreless tie after firing seven shutout innings Tuesday, and the Bulldogs (4-1 overall) rallied for two in the bottom of the eighth to win 2-0 over Merced at Bulldog Stadium. Freshman right-hander Zach Button (Serra) earned the win with two scoreless innings of relief.

“We have such a good bullpen,” Prozell said. “I definitely trust Button. He has a great arm for a freshman.”

After opening the year with 5-4 extra-inning loss at Diablo Valley College, the Bulldogs have now won four straight. Tuesday’s loss for Merced (3-1-1) marked its first of the season.

Prozell was CSM’s opening-day starter Jan. 26 at DVC. The right-hander worked four innings, allowing one run on four hits in his season debut.

“After our first loss to DVC, we definitely got a chip on our shoulder after that,” Prozell said.

Tuesday he had all of his pitches working, with a dynamic 12-6 curveball that provoked oohs-and-ahs from the Bulldogs’ dugout. Prozell’s fastball was effectively heavy, even as he fought to locate it through the early innings. He settled in to allow just three hits, a walk and a hit batsman against five strikeouts.

Merced had three runners reach scoring position with less than two outs against Prozell, but the only time he ever looked in trouble was the fourth. And that trouble was posed as he darted off the mound to field his position. Merced sophomore Dylon Jackson shot the left-center gap to lead off the inning with a double, then reached third on the second out of the inning, a groundout to shortstop Alec Ackerman (Chaparral-Colorado).

With two outs, Merced’s Jacob Williams topped a nubber to the first-base side of the mound. Prozell hustled to the ball though and through a bullet to first to retire the side, keeping the scoreless tie in check.

Prozell went on to set the sides down in order in the fifth and sixth. Then, he talked his way into going back out for the seventh, he said. He immediately got into trouble, facing a first-and-third, one-out jam. But he finished his day by recording back-to-back strikeouts to escape with the shutout in tact.

“My mindset is I always want to go eight or nine (innings) and go the distance,” Prozell said. “But early in the year, I understand my coaches don’t want to let me go more than seven.”

While he wasn’t able to earn the pitching win, Prozell sparked the game-winning rally at the plate. Entering the game as the designated hitter in the eighth inning, he led off the frame with a single. Pinch-runner Oscar Murray (Heritage-Brentwood) then moved to second on a wild pitch, and to third on a sacrifice bunt by Danny Carnazzo (Palma-Salinas).

After an intentional walk to Andrew Howard (Monte Vista-Danville), Ackerman made Merced pay by delivering the go-ahead knock. Howard later scored on an outfield error.

This entry was posted on Wednesday, February 6th, 2019 and is filed under Athletics, Baseball, Headline. You can follow any responses to this entry through RSS 2.0. You can leave a response, or trackback from your own site.