By Terry Bernal in Athletics, Baseball 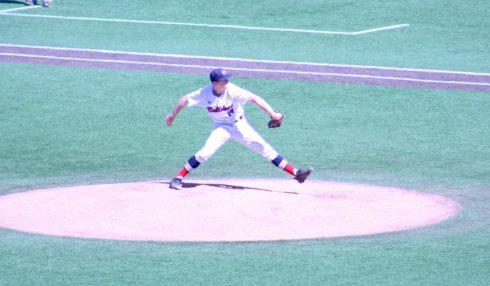 CSM pitcher Sean Prozell came out of the bullpen to pitch 7 2/3 innings of relief to earn the win as the Bulldogs clinched the outright Coast Golden Gate Conference championship. Photo by Terry Bernal / Daily Journal.

A little less than a month ago, the College of San Mateo baseball team was scuffling, having dropped four of five.

A 19-4 loss to Mission College April 2 was the low point — but it also happened be the turning point for the Bulldogs’ season.

Fast forward three weeks and San Mateo was hosting Mission with the Coast Golden Gate Conference title on the line — along with the top seed out of the conference for the upcoming postseason.

Down 4-0 early, the Bulldogs rallied over the second half of the game. They scored a combined nine runs in the sixth and seventh innings to pull out an 11-8 win, their 10th straight. The victory also secured the outright division title as well as a home playoff series when the postseason begins next weekend.

“This game epitomizes what this group has done the last half of the season,” CSM manager Doug Williams said. “To rip off 10 straight, it’s such a great accomplishment. [Mission] ripped us down there (at the beginning of the month). After that, we turned the corner.”

Everything that was on the line Thursday for CSM (16-4 conference, 27-11 overall), however, seemed destined to come crashing down early. Mission (14-6, 27-10) got to CSM starter Jamie Kruger early, as the sophomore out of Woodside loaded the bases in the second inning with one out, ending the sophomore’s day.

Williams then turned to his normal Thursday starter, Sean Prozell, to keep the Bulldogs in the game. While Prozell did allow all three inherited runners to score, the sophomore out of Carlmont went on to pitch 7 2/3 innings of gritty relief to earn the victory, the second relief appearance of his CSM career.

“That’s always my goal (to finish games). I want to take the ball,” Prozell said. “I feel I did my job.”

The Mission offense has made a habit of knocking opposing pitchers around during games this season and Thursday was no different. The Saints did touch up Prozell for five runs on 10 hits, including three home runs. But he did enough to let the Bulldogs offense come alive.

“Doesn’t surprise me in the least,” Williams said of Prozell’s outing. “He’s been Steady Eddie for us for two years.”

CSM No. 9 hitter Cole Gabrielson, a freshman out of Woodside, led Bulldogs’ offense. His two-run home run in the bottom of the fifth got the Bulldogs on the board and later added a sacrifice fly and a RBI single.

JJ Ota added three RBIs for CSM as well, drilling a two-run double in the sixth and hitting a sacrifice fly in the seventh.

Mission took a 3-0 lead in the second inning on a two-run single from Ryan Gault and a sacrifice fly from Doug Neubauer. The Saints added on a run in the third on the first of two Hunter Schilperoort home runs.

The CSM offense, on the other hand, was hitting in some bad luck early. The Saints rolled a pair of double plays — one in the second and the fourth innings — and starting pitcher Schilperoort held the Bulldogs to just three hits through the first four innings.

In the bottom of the fifth, CSM got on the scoreboard. Daniel Uchqun, who had 18 at-bats on the season coming into the game, singled to lead off the fifth, bringing up Gabrielson. After taking a first-pitch strike, Gabrielson drilled a two-run homer over the fence in left field to ignite the Bulldogs’ offense.

“You always need something to just get it (the offense) kick-started,” Gabrielson said.

Said Williams: “When you’re in a heavyweight fight … you have to punch back. [Gabrielson’s home run] was a punch. That got us back in it.”

Schilperoort finished out the fifth, but was lifted for a reliever to start the sixth and the CSM offense teed off. In the sixth, the Bulldogs batted around as they scored five runs on four hits. Cleanup hitter Justin Torres got the party started with a solo home over the 367-foot sign in the right-centerfield gap to cut the Mission lead to 4-3. Following a groundout to third, Daniel Haberern walked and Anthony Flores blooped a single to right. Following a Saints’ pitching change, CSM pinch hitter Christian Stapleton walked to load the bases. Gabrielson hit a sacrifice fly to right to plate Haberern to tie the game at 4-all.

Christian Ontai followed and squibbed a cue shot off the end of the bat toward second base. The weird spin on the ball caused the fielder to misplay it. Ontai legged out the infield hit, with Flores scoring to give CSM its first lead of the game, 5-4.

Ota then gave CSM a couple of insurance runs with a two-run double off the fence in right field for a 7-5 CSM advantage.

Mission rallied to tie the score at 7 with two runs in the top of the seventh, but CSM retook the lead in the bottom of the frame, as they batted around for the second inning in a row and scored four more times on two hits.

Facing the Saints’ third reliever of the game, the Bulldogs used a pair of walks and a hit batter to load the bases. Alec Ackerman then gave the lead back to CSM, driving in a run after being hit by a pitch for an 8-7 Bulldogs’ advantage. Pinch hitter Cole Sperling followed with an RBI single to left before Gabrielson’s bloop into no-man’s land in shallow right field to drive in his fourth RBI of the game. Ota rounded out the scoring with a sacrifice fly for the 11-7 CSM lead.

A Blake Diggle home run, his 11th of the season, put the Saints final run on the scoreboard in the top of the ninth, but Prozell got a strikeout looking to end the game and begin the conference-clinching dogpile on and around the pitcher’s mound.

“A lot has happened the last two weeks. These guys have just clicked,” Williams said. “They just wanted this thing.”

This entry was posted on Friday, April 26th, 2019 and is filed under Athletics, Baseball. You can follow any responses to this entry through RSS 2.0. You can leave a response, or trackback from your own site.