CSM Football 3-0 – and looking to be better 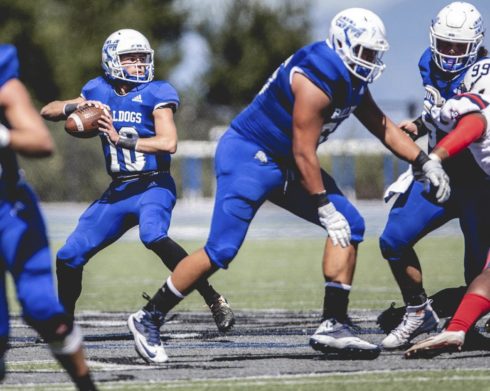 Quarterback Luke Bottari has shown a lot of poise as a true freshman. Photo by Patrick Nguyen

The untrained eye will look at the first three weeks of the season for the College of San Mateo football team and marvel at the numbers.

The Bulldogs are 3-0 and moved up to No. 2 in the state in the JC Athletic Bureau Coaches’ Poll. They’ve beaten College of the Siskiyous, San Joaquin Delta and American River by a combined score of 129-20, having scored 40 points or more in all three.

Yet CSM head coach Tim Tulloch believes the Bulldogs can be so much better.

This entry was posted on Wednesday, September 25th, 2019 and is filed under Athletics, Football, Headline. You can follow any responses to this entry through RSS 2.0. You can leave a response, or trackback from your own site.