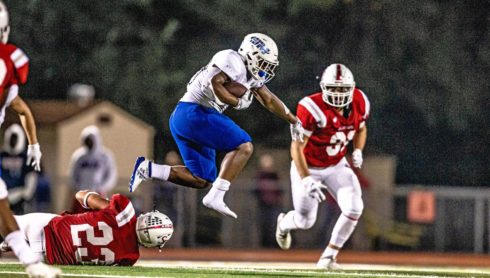 CSM running back Darrell Page hurdles into the end zone in the Bulldogs’ 24-12 win Saturday night in the Bay 6 Conference opener at Santa Rosa. Photo by Patrick Nguyen.

College of San Mateo’s Bay 6 Conference opener turned into quite a slugfest late in the second half Saturday night in Santa Rosa.

In the end, the Bulldogs showed plenty of punch to hold off Santa Rosa Junior College for a 24-12 victory, improving their undefeated overall record to 6-0.

“The league opener, winning that one is always important,” CSM quarterback Luke Bottari said. “Santa Rosa came to play and we came out with the ‘W.’ That’s all that matters right now.”

CSM (1-0 Bay 6, 6-0 overall) seemed plenty comfortable near the end of the third quarter when Bottari connected with Terrell Carter for a 1-yard touchdown pass to take a 17-6 lead. But Santa Rosa (0-1, 1-5) answered back on its next play from scrimmage when Maceo Barbosa stormed off a counter play for a 65-yard scoring run to make it 17-12 heading into the final quarter.

“To be honest, we were fine,” Bottari said. “Once we got in a rhythm to start the second half we weren’t really that uptight. We knew we could score on them and set up drives. So we were fine. We knew we had to bounce back.”

Bottari led the Bulldogs back downfield with a tactical drive, marching 68 yards on nine plays to connect for a second TD pass to Carter, this time on a 27-yard shot to re-up to a two-score advantage. It was a free play as the Santa Rosa got drawn offside, but with the play still alive Bottari floated one up at the 2 with Carter out-jumping a defender, then lunging across the goal line for the score.

The Bulldog defense then shut down the Bear Cubs, who tallied just one first down on their final two possessions — this coming on a 15-yard personal foul penalty — to finish off the win.

A true freshman out of Serra, Bottari was 18-of-25 passing for 168 yards and two touchdowns. He now owns a 63.5% completion percentage, ranking sixth in the state.

While Carter finished with four catches for 41 yards and two touchdowns, sophomore receiver Jermaine Jackson one of CSM’s most clutch targets. Jackson totaled 94 yards on eight receptions, with five of those catches coming in third-down situations to give the Bulldogs first-downs. CSM was 9 for 14 on third-down conversions throughout.

“He always comes up in clutch to be honest,” Bottari said. “He is always the go-to guy.”

After CSM and Santa Rosa traded field goals to tie it 3-3 with 6:41 remaining in the half, Jackson came up with his first flurry of third-down catches on the Bulldogs’ ensuing drive. On third-and-9 from just shy of midfield, Jackson hauled in 26-yard catch to advance to the Santa Rosa 27. Three plays later, on third-and-4 from the 21, Bottari found Jackson for a short 6-yard pick-up to extend the drive.

Three plays, Page rushed for an 8-yard score to send CSM into halftime with a 10-3 lead.

The closest the Bear Cubs would get is within 4 points. Keven Nguyen hit a 24-yard field goal with 5:53 remaining in the third quarter to close CSM’s lead to 10-6.

But the Bulldog defense came up clutch again after CSM’s next possession. Bottari got stopped on a fourth-and-1 run from the Santa Rosa 35 to force a turnover on downs. The Bear Cubs got pushed backward on a three-and-out, however, and then CSM sophomore Trey Smith blocked a punt to give the Bulldogs the ball at the Santa Rosa 18 to set up the big finish.

“We got the win and now we’re on to prepare for Laney,” Bottari said.

This entry was posted on Monday, October 21st, 2019 and is filed under Athletics, Football, Headline. You can follow any responses to this entry through RSS 2.0. You can leave a response, or trackback from your own site.