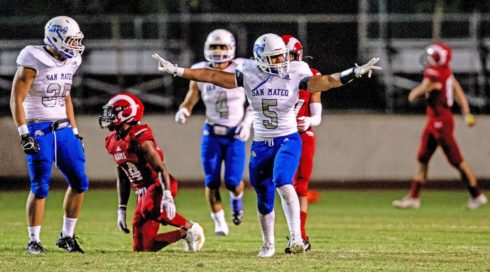 The Bulldogs, it seems, have Fresno City’s number — and that number is 3.

The College of San Mateo Bulldogs defense was indeed on display in a 17-3 victory in a battle of unbeaten teams Saturday at Ratcliffe Stadium in Fresno.

For the second straight year, the No.2-ranked Bulldogs (4-0 overall) held Fresno City to a mere field goal. That’s a significant accomplishment, seeing as the last time the No. 5 Rams didn’t score a TD in a game, aside from those two matchups against CSM, came in 2013 when they were shut out by City College of San Francisco.

This entry was posted on Wednesday, October 2nd, 2019 and is filed under Athletics, Football, Headline. You can follow any responses to this entry through RSS 2.0. You can leave a response, or trackback from your own site.