The magic number to claim an official state football championship appears to be 99.

After falling just short in season No. 98, College of San Mateo will have to wait at least another year.

It was an epic battle between the top two CC teams in both the state and nation, boasting “perfect” 12-0 records. San Mateo (12-1) still finished with its most wins in school history and will be awarded the No. 2 ranking in the final state coaches association poll.

MIiscues Lead to All RCC TDs: All the Tigers’ touchdowns came off miscues by the usually efficient CSM offense, providing an extreme test for the state’s stingiest defense — which had allowed only 9.7 points per game.

CSM sophomore linebacker Akeal Lailand was, arguably, the game’s top defensive player with a pacesetting nine tackles (eight solo), plus a forced fumble and a key third quarter fumble recovery (in the RCC red zone) to keep the Bulldogs in the game.  The latter play (and tackle) was not recorded, due to computer statistic issues – likely causing Lailand to miss receiving appropriate post-game honors.

The Bulldogs had taken an early 7-0 lead on a 6-yard run by quarterback Luke Bottari to complete a 71-yard drive. But they could not maintain that early momentum. A CSM lost fumble, a bad hold on a field goal attempt, and  pass interception led to all the points Riverside needed in the second quarter. A pick-6 in the fourth quarter effectively ended things.

After being limited to a first quarter field goal, the Tigers took the lead when Riverside defensive back Isaia PaoPao forced a Bulldogs fumble on their own 18, which was recovered by linebacker Zach Burrola. Riverside running back Thomas Kinslow ran the final 16 yards for a 10-7 advantage with 12:14 left in the second quarter.

San Mateo threatened to return the favor minutes later when Lailand forced Riverside to fumble on its own 30. Linebacker Tevita Tuitavake recovered for the Bulldogs. San Mateo got as far as the 20 before apparently settling for a 36-yard field goal. A bad hold contributed to the ball missing to the left.

Riverside took advantage, marching 80 yards to go up, 17-7, on Barlage’s 29-yard strike to Reggie Retzlaff with 6:18 left in the period, and those were the eventual winning points.

CSM Streaks: The Bulldogs, under second-year head coach Tim Tulloch, had not trailed in a game since September, at Fresno, while running off 12 straight victories. San Mateo still maintains a 15-game regular season winning streak and has won 20 consecutive Bay 6 League games over four seasons.

CSM’s aspirations of getting back into it before halftime were thwarted by Shawn Dourseau’s interception of a Bottari pass, returning it 28 yards to the Bulldogs 39 with 54 seconds left. Barlage drove the Tigers to the one and Cameron Bausley rushed it into the end zone as time expired to make it 24-7.

San Mateo started a comeback in the third quarter, stopping Riverside at the goal line with a pass interception in the end zone by Trey Smith. The Bulldogs then marched the length of the field, getting a 31-yard strike from Bottari to Tre Hines to get in position at the 2-yard line before scoring on Bottari’s 1-yard keeper with 2:13 left in the third quarter, closing to 24-14.

The CSM defense went back into action, forcing a fumble on Riverside’s first offensive play after the kickoff — which Lailand recovered on the Tigers 17. A pair of penalties and a sack forced the Bulldogs to settle for a career long 51-yard field goal attempt into the wind by Connor Sullivan, which fell just short. 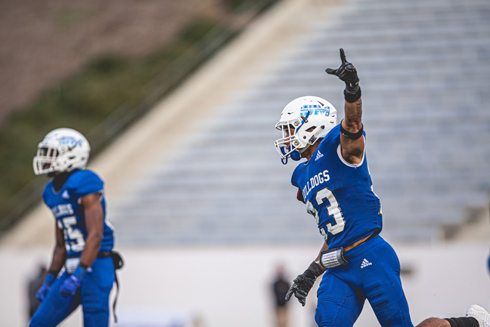 CSM goes back on offense down 10 after the Lailand fumble recovery. Photo by Patrick Nguyen.

Riverside had 431 yards of total offense to 217 for the Bulldogs. Each team had three turnovers.

It was San Mateo’s third appearance in the championship game over the past 11 seasons – without success.

The game marked the first meeting of two of the state’s legendary community college programs, which had 197 combined years of football.

It was the fourth official state title for Riverside coach Tom Craft, who had previously won three championships as head coach at Palomar College, starting in 1989 when Tulloch was a defensive back on that Comets team.

The Bob Stangel Defensive Player of the Game award went to Riverside sophomore linebacker Kobey Fitzgerald, with five tackles (including a quarterback hurry).

Top CSM defenders, in addition to Lailand, were sophomore linebacker Tevita Tuitavake with eight tackles (seven solo), including a sack, a tackle for loss, a pass break-up, and the fumble recovery; and sophomore linebacker Anuanu Tuiono with eight tackles, including a QB hurry. Tuiono finished as San Mateo’s top tackler on the season with 55, although appearing in only seven games – starting the last seven, beginning in November.

This entry was posted on Monday, December 16th, 2019 and is filed under Athletics, Football, Headline. You can follow any responses to this entry through RSS 2.0. You can leave a response, or trackback from your own site.