Bill Walsh and John Madden. Not to mention Bill Ring and Julian Edelman.

In the 98-year history of football at College of San Mateo, there’s no shortage of Super Bowl champions who once played for the Bulldogs.

The résumé is yet to be completed, though.

“When you have 19 Super Bowl rings in your family, that’s special,” coach Tim Tulloch said. “But for us, we’re just humble and hungry and we don’t want anything but an opportunity and a chance to earn it.”

In 2010, the Bulldogs lost 7-6 in a state final at College Heights Stadium. CSM also finished as a runner-up in 2017, then lost in last year’s playoffs to eventual state champion Laney College.

“We just want to bring the trophy back here, finally where it deserves to be,” said co-captain Trey Smith, a grayshirt sophomore out of Kennedy High in Fremont.

The Bulldogs are represented by players from 36 different schools in the Bay Area, including recent California Interscholastic Federation state championship programs such as Clayton Valley Charter, Menlo-Atherton, Milpitas, Serra, St. Francis and Wilcox

“This is truly a Bay Area all-star team,” said Tulloch, whose roster includes kickbacks like defensive back Bennett Williams, who left Illinois and is now an Oregon commit, where he will rejoin former St. Francis teammate Cyrus Habibi-Likio, who ran for 10 touchdowns as a redshirt sophomore.

“A lot of places at this level, you get guys that are just in it to get mine and get my scholarship and get out — it’s like a collection of free agents,” Tulloch added. “Here, this is a brotherhood and a team. It’s guys that are putting others in front of them, they see the bigger picture.”

“Geography helps, but it was 100 percent the program,” said Bottari, who also considered joining two other junior colleges in the state. “It was a landslide. Just not even the stats, the records. The winning here speaks for itself, but it’s just the way that everyone from the coaches down to the players down to the whole administration, it’s family. And you don’t get that anywhere else.” 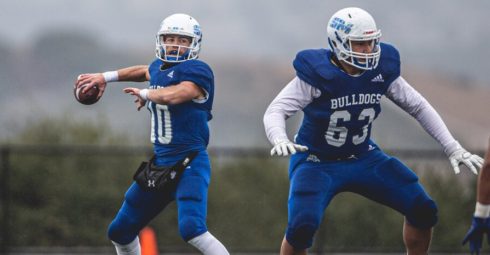 College of San Mateo quarterback Luke Bottari, No. 10, attempts a pass as offensive lineman Daniel Taumalolo protects him during a 41-0 rout of Modesto in the Northern California title game at College Heights Stadium in San Mateo on Nov. 30, 2019. (Patrick Nguyen / CSM Athletics)

The true freshman out of Serra High in San Mateo, located just three miles away from the CSM campus via H-92, enrolled in classes during the spring in order to participate in practices.

“He wanted to come in and compete for the job immediately,” Tulloch said. “He’s a gym rat, he’s watching film, he’s breaking down film — and this is a senior. Where guys are worrying about prom and their senior trip, he’s grinding. And he showed me from the get-go that he wants to win at the highest level.”

But in the later portion of this decade, CSM has established itself as the current Northern California powerhouse.

“It seems once you get it rolling a little bit, then kids just naturally gravitate in that direction,” said Los Gatos coach Mark Krail, whose former quarterback Dru Brown attended CSM, transferred to Hawaii after his freshman season and finished his college career at Oklahoma State this fall. “Credit to College of San Mateo, they’ve kind of taken that torch away and now they seem to be the great destination.” 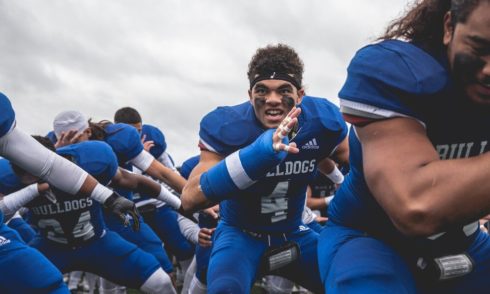 College of San Mateo safety Bennett Williams, No. 4, peforms the Haka dance with his teammates after CSM punched its ticket to the state championship with a 41-0 rout of Modesto in the Northern California title game at College Heights Stadium in San Mateo on Nov. 30, 2019. (Patrick Nguyen / CSM Athletics)

While Bottari enjoys his five-mile commute to campus, Kennedy High in Fremont and CSM are separated by 26.5 miles.

The distance didn’t derail the recruitment of Smith, who said: “When I came here, it just felt like home. From there, before I left the campus, I just knew that I wanted to come here.”

Smith is a key member of a defense that’s allowed just 9.7 points per game — No. 1 amongst the state’s 68 teams.

The Bulldogs recorded back-to-back shutouts in the Northern California playoffs to earn a second shot at state title in three years.

“If the team can’t score, they can’t win,” Smith said. “So we try to give the ball back to our offense as much as possible.”

The secondary will be tested by Riverside, which averages 51.2 points per game with an offense led by the most efficient quarterback in California.

What will it take to win the program’s first state title?

“We talked about it the other day,” Tulloch said. “You don’t win state championships. You win bingo, you win the lottery. In this game, you earn it.”

Bottari, the 10th most efficient passer in the state, added: “I feel like winning is a byproduct of everything that we put in.”

At CSM, it’s all about the bigger picture — including Super Bowl rings.

“For us, it’s old-school values in a new-school world,” Tulloch said. “I think there’s no magic wand, there’s no secret to success other than putting in the hours, putting in the time, doing it the right way.”

This entry was posted on Wednesday, December 11th, 2019 and is filed under Athletics, Football, Headline. You can follow any responses to this entry through RSS 2.0. You can leave a response, or trackback from your own site.