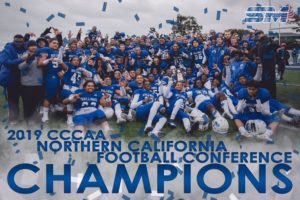 The undefeated Bulldogs shut out Modesto JC on Nov 29 and advance to the state championship game on Dec. 14.

CSM Will Play Riverside Dec. 14 for the State Championship

At 12-0, the Bulldogs are riding their best record in their 98-year history.   They face Riverside City College (also 12-0) in the California Community College Athletic Association title game Bakersfield College Memorial Stadium on Dec. 14 at 1:00 pm.

The match also serves as the mythical national JC/CC title game between the top two ranked teams in the country. San Mateo is currently top-ranked among all 125 JC/CC football teams in the USA. Riverside is No.2, followed by Mississippi Gulf Coast Community College (11-0) and No. 4 Modesto (9-3). Riverside defeated visiting College of the Canyons, 68-21, for the Southern California Football Association championship Saturday night.

“Our guys were ready to play,” said CSM coach Tim Tulloch. “Today was a very good milestone for us in all three phases, offense, defense, and special teams.” And all three phases contributed to the final point total.

The San Mateo defense stole the show and forced five Modesto turnovers. It provided the only score needed in the first quarter on a 4-yard fumble return by freshman defensive back Dillon Juniel. He forced the Pirates to fumble their punt attempt from the 34-yard line, then recovered the bobbled ball on the four before taking it to the end zone.

A pass interception by All-Bay 6 defensive back Bennett Williams set-up the Bulldogs on the Modesto 49 for the next TD. Jackson rushed for the final 32 yards to make it 14-0 in the second period. San Mateo settled for a 28-yard field goal by Dylan Moghaddam on its next possession, then allowed the Pirates just one offensive play before Trey Smith recovering a fumble on the Modesto 24. Jackson scored quickly from a yard out on the fifth play to make it 24-0 at halftime.

The San Mateo offense did not take the field again until it was 38-0, midway through the third quarter. A sack by Noah Lavulo stopped Modesto on its first series after the break, forcing a punt which Terrell Carter returned 64 yards for a 31-0 lead. Modesto’s next series ended with a 51-yard pass interception “pick 6” by Isaiah Downes.

After another 3-and-out by the Pirates, the well-rested San Mateo offense finally took the field with 8:20 remaining in the third quarter. The Bulldogs drove for another field goal, 28 yards by Moghaddam. He remains perfect on the season at 10 for 10. It was 41-0 with 3:33 left in the period and the Bulldogs were able to rest their top players the remainder of the game.

It was the first shutout suffered by usually offensive-minded Modesto in 16 years, since a 2003 loss to Fresno City College. CSM defeated Fresno, 21-0, in a first round playoff a week ago – for a 62-0 total in the two NorCal postseason games.

This entry was posted on Sunday, December 1st, 2019 and is filed under Alumni, Athletics, Community, Football, Headline, Highlights. You can follow any responses to this entry through RSS 2.0. You can leave a response, or trackback from your own site.