After stops at UCLA and CSM, Shea Moreno grateful for ‘second chance’ with Mississippi State softball

By Theo DeRosa in Athletics, Softball

The article below originally appeared in The Dispatch and is being reprinted with permission. 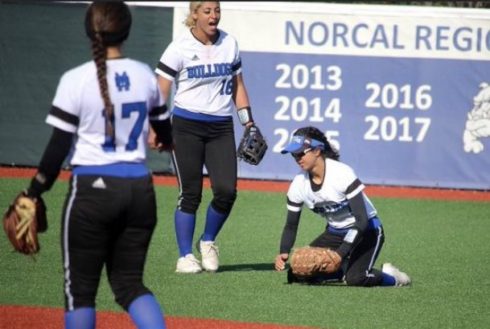 After redshirting at UCLA and transferring, Shea Moreno (16) found her stride at the College of San Mateo. Moreno signed with Mississippi State on April 17. Photo Courtesy of Shea Moreno.

Shea Moreno knew something was up.

Throughout Wednesday, she’d been receiving texts from relatives and family friends. Texts with weird questions: What’s your favorite candy? What do you like to drink?

But at 6 p.m., when her mother Krystal asked for her help outside their house in Elk Grove, California, Moreno had no idea what was coming.

As she stepped out, cars began to roll down the street in front of her — friends and family members come to celebrate her recent signing with the Mississippi State softball program. Twenty or 30 in all, compressed into 15 vehicles, they bore signs, streamers and the sweets Moreno liked best.

“I was just so overwhelmed with emotion, I instantly started crying,” Moreno said. “There were big old streams of tears just coming down my face.”

She wasn’t the only one getting emotional. Her relatives and the “softball family” — friends of Krystal’s who supported Moreno throughout her standout career at Sheldon High School in Sacramento — teared up, too.

“They’ve all seen my journey,” Moreno told The Dispatch.

Joining the Bulldogs was just the latest step in a path that took the catcher and infielder through the highs and lows of college softball. After signing with powerhouse UCLA — her dream school — out of Sheldon, Moreno redshirted and transferred to the College of San Mateo, a junior college in the Bay Area.

Last Friday, she signed her national letter of intent to Mississippi State, signifying a return to NCAA Division I prominence that Moreno was often unsure she could pull off.

“Just to celebrate it with her family, to see everybody so proud of me to get back to a D-I school and to continue to live out my dreams to play D-I softball, it was great,” Moreno said. “It was just great.”

Moreno set her sights on UCLA when she was 9, assuming when she got to Pasadena that things would be just how she always envisioned them.

That wasn’t the case.

She talked to her family, unsure of what she should do — and received a clear answer.

“I didn’t know if I should keep trying to find that love that I once had,” Moreno said. “They just basically told me you’ve gotta follow your heart.”

Her heart led her closer to home, as it turned out. Moreno transferred to the College of San Mateo, located about halfway between San Francisco and San Jose. There, the differences between college softball’s highest echelon and the junior college level became clear.

At UCLA, for example, the athletic department provided an endless wardrobe of shirts, uniforms and other Bruins gear; CSM gave Moreno two T-shirts and a uniform and told her she was on her own for the rest.

“It was definitely a big difference going from having whatever you wanted at UCLA and then coming back to a JC and having to work for your stuff and sometimes having to fight,” Moreno said.

Aware of the contrast between the Power Five and junior college levels, the CSM coaches still “spoiled” their players as best they could. At practice, they held the “Bulldog Olympics” every other day, offering players prizes like ear warmers, socks or extra belts for winning mini-competitions against their teammates.

Moreno, who admitted she felt out of shape and out of practice just two months before the 2020 season started, credited the Bulldogs’ coaches for helping her feel comfortable. A month later, she was back in shape; a week before games started, she felt ready to go.

“They pushed me to be the best that I can be, and they got me back to feeling like a good softball player — like a good teammate — and I appreciate them for that,” Moreno said. “Now I’m comfortable in my own skin, and I don’t doubt myself at all.”

While Moreno felt like she found a home at CSM, she remained in pursuit of her main goal: earning another shot to play at the Division I level.

Soon, she had plenty of opportunities. Texas, Auburn, and two schools in the Los Angeles area called head coach Nicole Quigley-Borg about Moreno, but Moreno never felt much of a connection with any of the schools.

“I just never really created that bond with them,” she said. “It was kind of more like a conversation between the two coaches.”

But when Mississippi State came calling, things were different. Moreno got along well with the Bulldogs’ coaches and enjoyed the support when several players started following her on Instagram.

Head coach and Bay Area native Samantha Ricketts was understanding when Moreno voiced her concerns about the fast-paced, somewhat anonymous life in California — something she wanted a change from.

The words resonated with Moreno and her family. Soon afterward, she called Ricketts again.

That will certainly include battles for playing time on a talented roster that, thanks to the NCAA’s decision to give its spring-sport student-athletes an extra year of eligibility, won’t lose many players. But Moreno is fine with that.

“We’re gonna all make each other better by competing for these spots,” she said. “If I’m working my hardest, and somebody outworks me, then I’m happy because then that means that my team gets that best player on the field.”

Moreno’s official recruiting visit to Starkville was scheduled for two days after the NCAA shut down college sports, so she hasn’t been to Mississippi yet. But she’s ready for — hoping for, really — what she expects to be a “culture shock.” She wants to get a feel for Mississippi, get on campus, meet her teammates, and let things go from there.

“I’m super excited to just get out there and start this new journey,” Moreno said. “I’ve just been waiting and anticipating it.”

This entry was posted on Friday, April 24th, 2020 and is filed under Athletics, Softball. You can follow any responses to this entry through RSS 2.0. You can leave a response, or trackback from your own site.