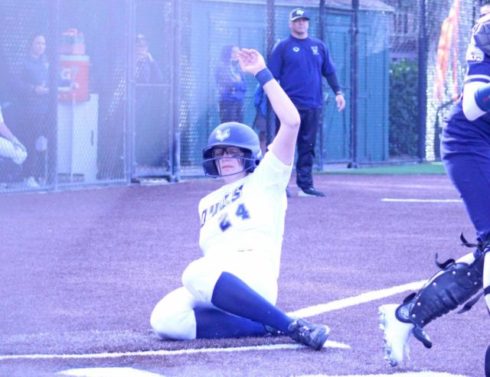 Aubrie Businger slides into home during a game last season when Oregon Tech played at Menlo College. Businger is one of many CSM transfers playing for four-year softball programs in Oregon.

Softball extraordinaire Aubrie Businger was just settling in to her new role with Oregon Tech University last season when sports nationwide were hit with the 2020 pandemic closures.

A junior transfer out of College of San Mateo, Businger was batting a solid .323 through her first 10 games with Oregon Tech, as the program closed with a four-game sweep of Carroll College-Montana prior to the season’s cancelation. Now, in maintaining her junior season of eligibility, Businger is batting respectable .367 through her first 10 games — “respectable,” because Oregon Tech is batting .396 as a team — with her Owls off to an unbeaten 10-0 start.

“I love it,” Businger said. “You never know when you’re going to get the ball hit right at you, or if this girl is going to lay a bunt down. I think the unknown of playing third base is what I really like about it.”

That isn’t all that has changed for Businger. She was recruited to Oregon Tech out of CSM along with catcher Mackenzie Driscoll (Hillsdale), and the two joined two-way standout Emily McAdams (Sequoia), also out of CSM. This year, though, the Lady Bulldog alumnae broke up the band when McAdams transferred to the NCAA Division II level at Humboldt State.

One thing that hasn’t changed, though, is Businger’s sweet, level right-handed swing that made her a high school star at Mills. After hitting for a career .424 batting average through four years of varsity ball, she went on to hit .387 through two years at CSM.

“She’s a kid that naturally sprays the ball to all fields,” Oregon Tech head coach Greg Stewart said. “And when she hits it, the ball just jumps off her bat.”

The scary part is Businger and Stewart concur that Businger still hasn’t found her groove at the plate. A little rust from the nearly yearlong layoff? Perhaps. But it hasn’t stopped her from settling in the heart of the batting order as the Owls’ No. 5 hitter.

Stewart was keen to turn Businger into a run producer. At CSM, she typically hit at the top of the battling order.

“I think now, just 10 games into it, she’s identified what is going to make her better,” Stewart said. “And it won’t be long before she just locks in.”

Oregon Tech is stacked 1 through 9 though. Despite hitting a glowing .367, Businger ranks just sixth among Owls starters in batting average. McKenna Armantrout leads the Cascade Collegiate Conference with a .526 mark, with Olvia Lethlean close behind at .524.

“One through 9, there’s not an easy out in the bunch,” Stewart said. 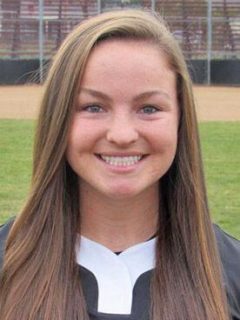 Some 65 miles west of Oregon Tech, another group of CSM transfers is making headway at Southern Oregon University in Ashland, Oregon.

Allie Stines (Capuchino) is the Hawks’ leading hitter at .479, with Lauren Quirke (Hillsdale) right behind at .465. Junior catcher Riley Donovan is knocking it around as well, hitting at a .366 mark.

But Quirke and Donovan teamed for a historic feat on the other side of the ball Feb. 26 at George Fox University in Newberg, Oregon, with Quirke stepping into the circle to fire a regulation perfect game in Southern Oregon’s 1-0 victory.

Quirke struck out eight while needing just 76 pitches to keep George Fox off the basepaths all day long and earned Cascade Collegiate Conference Pitcher of the Week honors for her effort. Donovan caught the gem and had two hits in the game. Stines did contribute the best batting line, though, going 3 for 4 out of the leadoff spot for the 11-1 Hawks.

This entry was posted on Friday, March 5th, 2021 and is filed under Athletics, Softball. You can follow any responses to this entry through RSS 2.0. You can leave a response, or trackback from your own site.