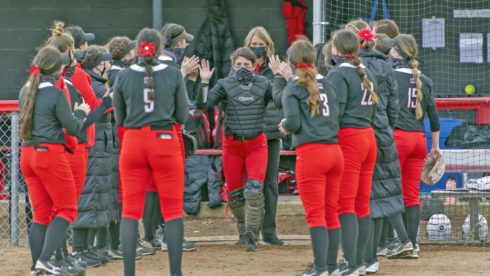 The profusion of softball talent College of San Mateo has exported to the Oregon NAIA ranks is not an accident.

Not according to Southern Oregon University catcher Allie Stines. 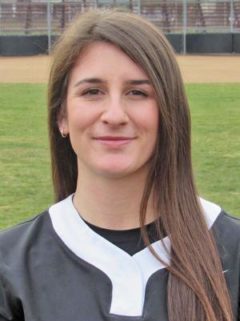 Stines and Businger are from the same hometown of Millbrae. And both are absolutely raking this season. Businger has settled into the No. 3 spot in the Oregon Tech batting order, hitting .393 for a team ranking sixth in the nation among NAIA programs with a cumulative .357 batting average.

“I think we’re playing at our highest level if not maybe still climbing to that highest level where our pitching’s on and our hitting’s on at the same time,” Businger said. “And I just think if we get all the cylinders rolling, we’re going to come out in the tournament in a good spot.”

Southern Oregon has been hitting even better. The team ranks first in the nation with a .408 batting average, 38 points higher than second-best Olivet Nazarene-Illinois. While Quirke is the Raiders’ most prolific hitter — ranking sixth in the nation with a .486 average — Stines has been an absolute rabbit at the top of the batting order.

As the Raiders’ leadoff hitter, Stines leads the nation with 31 doubles.

“She works really hard,” Southern Oregon head coach Jess Pistole said. “She’s a doubles hitter. She’s just a gap-to-gap hitter and she understands where the contact point is and looks for those pitches that are going to feed into that ability to hit doubles.”

Stines delivered the happy flight for Southern Oregon when she notched the game-winning hit in the closing game of the NAIA Opening Round against Hope International May 19 in Medford, Oregon. With the game tied 3-3 in the bottom of the sixth, Stines stepped to the plate with the bases loaded and one out.

“I was hellbent and determined to win this game no matter what,” Stines said.

The reason for Stines’s hellbent determination was because of a baserunning blunder in the previous inning. After she singled to lead off the fifth, she misread a sign from her coach and, despite having stolen just one base this season, she got thrown out trying to steal second.

“So, I was fired up and I was like: There’s no way I’m not getting this done,” Stines said.

Stines got a first-pitch rise ball off the outside of the plate, and the left-handed contact aficionado slayed a dying quail to left field to drive home sophomore Rylan Austin for the go-ahead run.

“I got that first pitch, but it was probably one of the weakest hits I’ve ever gotten,” Stines said.

And perhaps one of the grittiest.

“They compete,” Businger said of Southern Oregon, a team that took 3 of 4 games from Oregon Tech in the regular season “They never give up. If they’re down by two runs or if they’re down by five runs, they’re going to compete through the entire game. And we’ve just got to make sure we compete with them.”

The two teams did meet once more in the Cascade Collegiate Tournament semifinals, with Oregon Tech rolling to a 5-0 victory. The Owls went on to win the tourney title.

It’s quite a conference title to boast. Of the 10 teams playing in the NAIA World Series, three are from the CCC, including College of Idaho.

“It’s one of those things that’s not surprising to me because our conference is really strong … so this is just kind of validating that,” Pistole said.

Both Southern Oregon and Oregon Tech have previously been to the big dance. Oregon Tech won the NAIA national championship in 2011. Southern Oregon is the reigning champion, having captured the crown in 2019 when Stines was a transfer junior. There was no tournament last year due to the season’s cancellation.

“I just think the whole year has been obviously different,” Pistole said. “So, we’ve had to find a way through that just like any other team. You could see in the results of postseason, opening round, just because you were here two years ago doesn’t guarantee you to be here now. So, you’ve got to find your ways to do things. And I think we’ve done the best we could to endure all the obstacles of this year.”

Stines is one of 10 players remaining from the 2019 championship team. She earned first-team All-CCC honors this year, and also landed conference Gold Glove honors as a catcher. Not bad for splitting time behind the dish with Donovan. Stines plays outfield when Donovan catches.

The 22-year-old Stines is a pure ballplayer though — as versatile as she is outstanding in the field, while enjoying as competitive as an at-bat as anyone on the NAIA circuit when she steps to the plate. Especially in clutch situations.

“She just [excels] in those situations,” Pistole said. “She’s mentally nails and loves to be the one and be in that place.”

Double-elimination play in the NAIA World Series is scheduled through this coming Tuesday. The championship round is Wednesday beginning at 2 p.m. PT.

This entry was posted on Tuesday, June 1st, 2021 and is filed under Athletics, Headline, Softball. You can follow any responses to this entry through RSS 2.0. You can leave a response, or trackback from your own site.