By Nathan Mollat in Athletics, Softball

As Nicole Quigley-Borg made her way home from Georgia after watching five of her former players playing for the NAIA college softball national championship Thursday night, she couldn’t help but be excited for them.

But the College of San Mateo head softball coach couldn’t help but think what might have been this year — or last year, for that matter.

“We had a ton of talent these last two years,” Quigley-Borg said. “The sad part for me with this group, it was a special group and they didn’t get a chance to fight for a state title.”

It’s hard to argue. The Bulldogs were off to a 10-0 start in 2020 when the season was shuttered due to the pandemic. When they finally got back on the field to prepare for 2021, they picked up where they left off, going a perfect 27-0 this season.

A noble goal, no doubt. But that was it. There was no way to determine if this was the CSM squad that finally broke through and won that elusive state championship — because the California Community College Athletic Association determined last year, amid the shutdown, that there would be regional or state playoffs during the 2020-21 season. 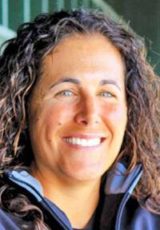 “It was unfortunate on the California end that they made that decision … last year,” Quigley-Borg said. “But the decision was made and we made peace with it early on.”

Instead, the Bulldogs decided to embrace the simple pleasure of being back on the field with their teammates, participating in a game they’ve played for a majority of their lives.

The reunion was made even more special because Quigley-Borg said she polled her team and decided to not participate in on-field conditioning when it was finally allowed.

“We opted out [of conditioning drills] and felt more comfortable working at home. We waited longer than every sport on campus to get on the field,” Quigley-Borg said. “When we came back … their spirits were lifted. We had to push harder to get the season going.

“Once we came together, our common goal was pretty steady. … Just being on the field was a huge part … of our focus. Making sure we could pass our COVID tests so we could play that week.”

With no playoff carrot dangling at the end of the season, the Bulldogs did the only thing they could control — and that was to win every game.

And in softball, that starts with pitching. As good as the pitching that has come through CSM in Quigley-Borg’s 15 seasons, this year’s staff might have been the best as they had three of the top-10 pitchers in the state.

“We probably had the best pitching staff we’ve ever had,” Quigley-Borg said. “We’ve always had great pitching, but we’ve never had a (great) pitching staff.”

Those pitchers were backed with one of the strongest batting orders in the state. Sara Giles, who ended the season with four homers and nine RBIs in doubleheader sweep of San Jose last weekend, led the state in batting and slugging percentage — .575 and 1.150, respectively. Jada Walker, who set the table during her high school career at San Mateo, led the state in runs scored with 27 and was second in stolen bases, finishing with 15.

“We talk about being the best and preparing to be the best,” Quigley-Borg said. “We went undefeated. That was our goal. There were no other goals to make and we achieved that and it was big.”

It is the second time in Quigley-Borg Era that the Bulldogs completed an undefeated regular season, going 35-0 in 2015. In fact, about all the Bulldogs do is win. They are 238-25 over the last six seasons. They’ve been at or near the top of the state rankings every season.

The Bulldogs have been so successful under Quigley-Borg that she picked up her 500th win as head coach with a 5-1 victory over Modesto May 1. While she appreciates the number, it’s not anything on which she was focused.

“The 500 wins are great,” Quigley-Borg. “It’s a special moment, especially with the coaches who are with me. Toby Garza and Dale Bassman have been with the whole way through.”

Besides, the only number Quigley-Borg wants is one — one state title. The closest the Bulldogs came was during the 2015 season. Their only two losses came in the state championship series.

While she knows that, at this point, that winning a state crown is how the program will be judged, Quigley-Borg laments that more people don’t appreciate the grind it takes to keep a community college program consistently battling for a state championship.

“I think the sad part is people don’t realize how hard it is to maintain a winning record year after year in a two-year program. You’re kicking nine players out (to transfer) and bring nine players in to replace them,” Quigley-Borg said. “That (lack) of a state championship just sits over your head. We just want to win one already. But I think the expectation is that we’re going to get there.”

This entry was posted on Friday, June 4th, 2021 and is filed under Athletics, Softball. You can follow any responses to this entry through RSS 2.0. You can leave a response, or trackback from your own site.