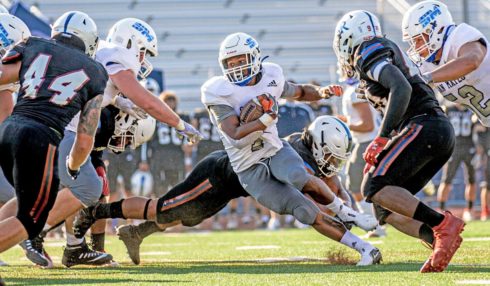 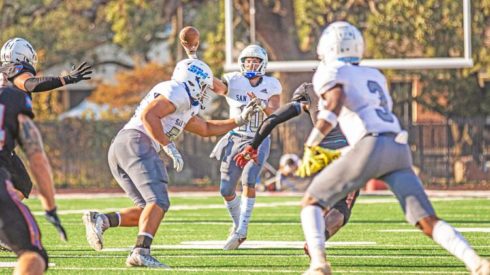 Sophomore quarterback Luke Bottari threw for the first two touchdowns of 2021 for CSM in the program’s first game in 630 days.

Luke Bottari and J’Wan Evans struck quite a balance in College of San Mateo’s 45-5 victory at Santa Rosa in Saturday’s season opener.

Bottari, a sophomore quarterback, got the Bulldogs on the board with two first-half touchdown passes. Evans, a transfer from Virginia Tech, did the rest 183 yards rushing on 10 carries and two touchdowns to solidify the rout.

For the Bulldogs, who have not taken the field since 2019, it had been 630 days since their last game.

Evans — a Philadelphia native out of East Rockingham High — did not play as a walk-on at Virginia Tech in 2019 but hit the ground running in his first collegiate reps Saturday with the Bulldogs. With CSM leading 7-0, the first time the redshirt freshman touched the ball was on the Bulldogs’ first play of the second quarter when he promptly rushed for a 37-yard pickup.

Bottari (Serra) had already given CSM a lead in the first quarter with a 45-yard scoring strike to Reymello Murphy (Santa Margarita). Evans’ second-quarter legs set up Bottari for his second TD, a 23-yard scoring pass to Mason Starling (Rainier Beach-Washington state) to up the lead to 14-0.

Evans capped CSM’s following possession with a 34-yard scoring run. Early in the second half, with CSM facing third-and-3 from its own 20, Evans broke free for an 80-yard touchdown run.

Bottari finished with a sharp 11-of-17 passing day with 168 yards and two touchdowns.

“Luke did everything to keep this team together for the last 24 months,” Tulloch said. “Off the field as a teammate, as a friend and as a brother, he kept these guys together. … Luke just gets it. He gets the game as a 19-year-old quarterback at a different level than most.”

Sophomore running back Darrell Page (Homestead) added 13 carries for 76 yards and a touchdown for the Bulldogs.

“There were no broken plays or freebies or easy ones … so it took all 11 to execute and move the ball,” Tulloch said. “So, it’s a tribute to our players for how hard they played. … Santa Rosa is a really good team and they made us earn everything.”

Sophomore linebacker Demarii Blanks (Carlmont) helped set the tone early for the CSM defense. Santa Rosa went three-and-out on its opening possession, capped by Blanks’ third-down sack of quarterback Jake Simmons. The Bear Cubs got the ball back at their own 20 with three minutes remaining in the first quarter after CSM kicker Gabe Plascencia missed a 31-yard field goal try. But the Bulldogs again forced a three-and-out, including a tackle for a loss on second down by Blanks.

“He really has found a home,” Tulloch said of Blanks, who converted to defense following the 2019 season. “He is a naturally, instinctively fast, physical inside linebacker. It’s just been a great fit for him.”

Santa Rosa totaled just 11 first downs on the night and didn’t see its first until the closing seconds of the first quarter. And while the 68-yard pass from Simmons to Micha Fontenot set up a field goal try, sophomore Dillon Juniel (Sheldon-Sacramento) blocked the 40-yard attempt by Dillon Crowell.

Crowell wouldn’t get a reprieve until the closing seconds of the first half with a 34-yard field goal to make it 21-3 heading into halftime.

Santa Rosa scored its only other points when DJ Martin sacked Bottari in the end zone for a safety to make it 28-5.

Page later scored on a 9-yard rush; Plascencia added a 33-yard field goal; and CSM’s defense closed out the day with a score when Ja’ir Smith (Mallard Creek-North Carolina) blocked a punt in the red zone and gathered the loose ball for a touchdown with 15 seconds left to play in the contest.

The Bulldogs return to action this Saturday for their home opener. CSM is slated to take on College of the Sequoias. Kickoff at Bulldog Stadium is set for 1 p.m.

This entry was posted on Tuesday, September 7th, 2021 and is filed under Athletics, Football. You can follow any responses to this entry through RSS 2.0. You can leave a response, or trackback from your own site.