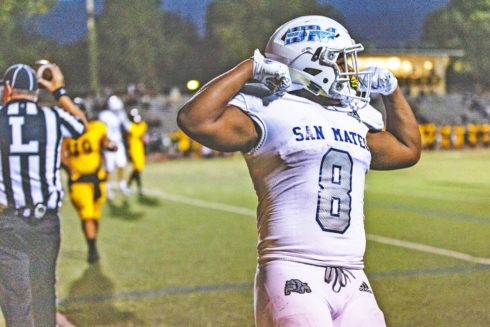 CSM running back Darrell Page celebrates one of his four touchdown runs Saturday at Chabot. Photo by Patrick Nguyen.

A 2018 graduate of St. Francis, Page fronted a CSM ground attack that totaled 314 team rushing yards. He accounted for the team’s first four touchdowns, capping the game’s opening possession with a 54-yard scoring run, and later adding short TD jaunts of 1, 1 and 8 yards.

Page carried 12 times for a career-high 136 yards. He added a 36-yard reception from quarterback Luke Bottari (11-of-17 passing, 147 yards, two interceptions) to finish with 172 total yards.

Sophomore defensive back Dillon Juniel (Sheldon-Sacramento) recorded his first interception of the season near the end of the first half. Asi Bailey and Jovan McConico tabbed interceptions for Chabot.

The stage is now set for CSM’s regular-season finale with City College of San Francisco. The Rams also earned a win Saturday, defeating Diablo Valley College 41-16. Both CSM and CCSF now carry perfect 9-0 overall records and are tied atop the Bay 6 Conference standings.

The Bulldogs will play host to CCSF this Saturday. Kickoff at College Heights Stadium is scheduled for 1 p.m.

This entry was posted on Thursday, November 11th, 2021 and is filed under Athletics, Football, Headline. You can follow any responses to this entry through RSS 2.0. You can leave a response, or trackback from your own site.