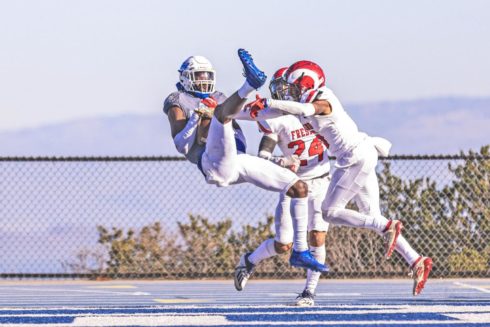 Well, the Bulldogs have got their rematch.

College of San Mateo opened the community college playoffs Saturday with a 31-14 victory over No. 3-seed Fresno City College in the Northern California regional semifinals at College Heights Stadium.

The No. 2-seed Bulldogs (10-1) now advance to the NCFC regional championship game to face No. 1 City College of San Francisco. It was two weeks ago that CSM fell to CCSF on the final day of the regular season 31-27 in a battle for the Bay 6 Conference championship.

“Got to get payback,” CSM linebacker Justin DeWitt said. “They got us once, we’ve got to get them. We’ve got to finish.” 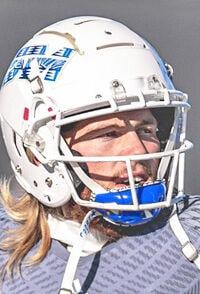 Sophomore quarterback Luke Bottari entered the record books for CSM. Not only did Bottari enjoy his steadiest day ever as a collegiate quarterback — he completed 26 of 33 passes for a career-high 78.8% percentage — his four scoring throws give him 44 career touchdown passes, breaking the previous program record of 43 set by Dave Giannini from 1983-84.

And, wow, was the record-breaking pass — a 9-yard toss to sophomore receiver Mason Starling — one for the highlight reel. Starling ran an out route toward the back corner of the end zone. Bottari lofted up a timing pass for Starling, who left his feet to catch it with full extension while horizontal to the ground.

“That was something I wanted to do because I just take it personal when somebody thinks I’m not on that level,” Starling said. 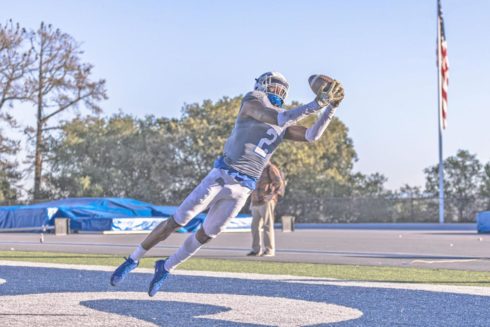 It was Starling’s career-high third touchdown catch of the day. The sophomore totaled 14 catches for 154 yards, both also new career-highs.

“[Bottari and Starling] have such good chemistry,” CSM head coach Tim Tulloch said. “Luke trusts Mason, Mason trusts Luke, and they’ve had so many thousands and thousands of reps over this COVID, and over this time together to build that chemistry. … Those two are just so special.”

Jalen Lampley showed off his wheels for CSM’s first score of the day. On second-and-10 at the Fresno City 31, Lampley ran a slot sweep for a short shovel pass from Bottari, and Lampley dashed 31 yards for the score to give CSM a 7-0 advantage.

Starling nearly had another touchdown catch in the closing seconds of the first half. With the Bulldogs leading 14-0, Starling made tumbling grab at the front of the end zone but was ruled out of bounds before the catch, rendering it incomplete.

With time winding down, Bottari went over the middle on the following play, connecting with Starling inside the 5; Starling tried to fight his way across the goal line but was brought down at the 2 with two seconds to go. Gabe Plascencia then booted a gimmie 20-yard field goal, and a historic one at that, to give the Bulldogs a 17-0 lead going into halftime.

With the field goal, Plascencia tied CSM’s single-season record of 13, originally set by Kenny Anderson in 2011.

CSM’s defense wreaked havoc on Fresno in the first half. The Bulldogs sacked Rams quarterback Justin Holaday on consecutive possessions, both on third-downs, to force Fresno to punt. DeWitt and Kairo Reed combined for the first sack. Freshman nose guard Kavika Baumgartner tallied the other sack.

But Fresno (8-3) opened the second half with a head of steam, driving downfield with a tempo to march 75 yards on eight plays, scoring on a 47-yard pass from Holaday to freshman receiver Tabari Rollins to cut the lead to 17-7.

“I guess they just started off a little slow,” CSM defensive tackle Vaughn Mamea said. “But being down, for them, it didn’t stop them. They just wanted to play the rest of the game and come back.”

CSM answered right back with a quick drive, capped by a 13-yard scoring pass from Bottari to Starling, who elevated in tight coverage near the back of the end zone for another highlight-reel score.

But the Bulldogs missed a chance to add on when Plascencia was off target on a 44-yard field goal try near the end of the third quarter. And at the start of the fourth, Fresno kept the pressure up by scoring on a 2-yard pass from Holaday to Darrien Gaines to make it 24-14.

“It was pressure and keeping eyes on him and finding a way to make sure he didn’t beat us,” Tulloch said. “We knew trying to shut out a team like that is extremely tough. So, we knew it was going to be a back and forth, and our defense did a great job, especially when we needed to.”

The biggest stop came on Fresno’s next possession. After a CSM three-and-out, the Rams took over at their own 30-yard line with 12:04 to play. Holaday led a dramatic drive, including two fourth-down completions. Facing fourth-and-17 from the CSM 29, however, Holaday missed a golden opportunity by overshooting a wide-open Aaron Blancas in the flat.

The Bulldogs took over and drove 71 yards on 13 plays to punctuate the day with the record-breaking showstopper by Bottari to Starlling.

“I’m ready to just go out and do what we’re supposed to do,” Starling said. “I’m ready for my rematch.”

This entry was posted on Monday, November 29th, 2021 and is filed under Athletics, Football. You can follow any responses to this entry through RSS 2.0. You can leave a response, or trackback from your own site.