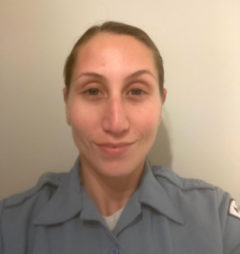 CSM student Daniela Haas’ relaxed demeanor hides an intense physical and mental toughness. The youngest of eight kids growing up in Peru, Daniela tackled any sport that happened to draw her interest as a kid, “anything and everything that didn’t involve a bat or a racket,” she says. One of those sports that would introduce her to one of her callings was Japanese Jiu-Jitsu. That first taste of martial arts led her to begin training seriously as a competitive Muay Thai fighter through her teenage years. She worked hard and became good enough to join the Peruvian National Muay Thai Team, but it wasn’t enough for her. She decided to move from her home country to the Bay Area at the age of 22. Asked why, she claims, “West Coast Muay Thai was where the action was. I didn’t want to be a big fish in a small pond.”

Daniela decided to move to San Mateo because her aunt and cousin already lived here. Her cousin attended College of San Mateo and suggested Daniela take some classes. While continuing her competitive fighting, Daniela applied to CSM and registered for kinesiology and nutrition classes being that it was a natural fit with her love of fighting. She planned to use this knowledge to work with fighters on injury prevention and cutting their weight, which was often difficult for many of them.

She continued her classes and played water polo for a year before completing her associate degrees in kinesiology and nutrition. Daniela then transferred to San Jose State University to continue her kinesiology and nutrition studies. Unfortunately, her financial aid began to run out, forcing her to contemplate her academic future. She understood that she’d need to eventually get a master’s degree to secure a solid career in the nutrition field. Looking back at that moment, she says, “That was not a commitment I was ready for and adding the monetary issues, I realized it was ludicrous.” While she appreciated the education she had already received, it dawned on her that she wasn’t interested in continuing her learning in a formal education setting.

Daniela’s continued involvement with fighting helped bring her back to CSM to join the CSM Fire Academy. “I was doing Brazilian Jiu-Jitsu, and some of my friends there—I want to say about half of them—were firefighters, and they’re like, why don’t you go into firefighting? You will be amazing.” She was worried that she might be too old for firefighting but decided to take a class anyway. “That first step was all that I needed; I dove into the pool and fell in love with it.”

She learned that just like competitive fighting, firefighting requires intense physical and mental challenges, problem-solving under pressure, and self-confidence. In addition, Daniela found that she loved the camaraderie and teamwork that’s part of the program. “I’ve always been part of a team, whether it’s in sports or as part of my large family, it’s just great!” She also notes the strength of the bonds that are formed in the Academy, saying, “I feel like the bonds I’m making right now with my classmates and instructors will still be there 10, 20, and 30 years down the road, and that’s a beautiful thing.”

This passion and dedication led to Daniela becoming the first female Fire Academy student to be nominated as Academy Leader. According to CSM Fire Instructor and Academy Co-Director Ben’Zara Minkin, “The Academy Leader is a designation that is given to students that possess strong leadership traits, display strategic and tactical knowledge relevant to the fire service, and possess a background that can enhance their classes’ learning objectives.” In addition, Daniela notes that this role requires her to be a liaison between the student body and the instructors, ensuring consistency and structure among the students. “It’s not glamorous, but it’s fun, and I’ve learned so much about dealing with different personalities and my own.”

Asked to summarize his experience with Daniela, Ben’Zara says, “It is rare in this world to encounter people who desire to listen to the world and those around them. Far too often we interpret people through our own internal voices. Daniela’s authenticity and singularity is substantiated through her strong sense of self, and is manifested through exhausting her ability to listen.”

CSM Fire Technology Program Coordinator Christy Baird adds, “We are so fortunate to have Daniela as the lead for the Fire Academy this semester. She exemplifies the word team. It is rare to find an individual who is so aware of everyone in the group. She is conscious of their lives outside of the academy and checks on the students regularly. She has done all that she can to lift others up and gone above and beyond to make sure that all 24 students that started the Academy in August finish the academy in December. She is truly an amazing individual. We can’t wait to see what the world has in store for Daniela, or should we say, what Daniela has in store for the world!”

Daniela will complete her third associate degree when she finishes the Fire Academy at the end of this semester. Looking forward, she says, “it’s bittersweet because I love the Academy, but I’m also very excited for the next chapters.” She recently received the great news that she’s been hired by the San Francisco Fire Department, and will begin there in mid-January. She is considering returning to CSM in the future to teach physical training to new students in the Fire Academy. “Maybe CSM will call me back again!” Daniela says with a wry smile.

This entry was posted on Friday, December 17th, 2021 and is filed under Alumni, Community, Headline. You can follow any responses to this entry through RSS 2.0. You can leave a response, or trackback from your own site.