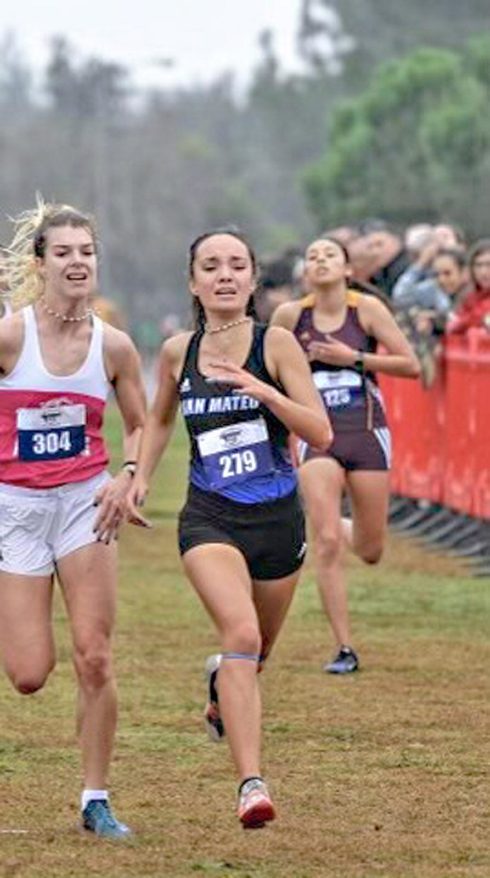 College of San Mateo’s Shannen Dorn finished out her sophomore cross-country season by taking fifth place at the California Community College Athletic Association state cross country championship meet Saturday, Nov. 20 at Woodward Park in Fresno. With a time of 18 minutes, 45.7 seconds in the 5-kilometer event, the finish was the best by any runner from Northern California. It is also the best finish by a women’s runner in the modern history of CSM, dating back to 1977. Photo courtesy of Shannen Dorn.

Shannen Dorn was the only woman left standing for the College of San Mateo cross-country team this season.

Prior to the coronavirus pandemic, the CSM women’s cross-country team was on the rise. The Lady Bulldogs qualified a full team of five freshman women for the 2019 California Community College Athletic Association state cross-country finals, including Dorn. The expectation for 2020 was to keep the team intact, to grow the numbers and improve on the team’s sixth-place finish at the 2019 Northern California Championship.

However, that’s not the way the next chapter unfolded. Returning from COVID in 2021, only three runners turned out for the CSM women’s team, meaning they had no team. Dorn, along with freshmen Lillian Fahsel and Zoe Thompson, competed solely as individual runners this season.

“It was pretty difficult in a way because we were all just trying to focus on getting individual spots to move on,” Dorn said. “We didn’t work together as a team, so it did make this season a little more difficult.”

That didn’t stop Dorn from enjoying a breakout season. As the only CSM runner to qualify for the CCCAA state meet, the sophomore ran her way onto the podium in the five-kilometer race Saturday, Nov. 20 at Woodward Park in Fresno. With a time of 18 minutes, 45.7 seconds, Dorn took fifth place at the state meet, and ranked as the top finisher from Northern California.

And it was quite a comeback effort. After the two-mile mark, Dorn was in 11th place, with her two main nemeses — Hartnell’s Sofia Camacho and Valeria Lozano-Gomez — ahead of her.

“I was able to get a really good kick in at the end,” Dorn said. “When I started the last mile, I was in 11th place … so I felt that was the best race I ran probably in my life.”

CSM head coach Kajari Burns could see Dorn down the stretch, and said she picked off Camacho and Lozano-Gomez in the last 200 meters. Dorn hadn’t finished ahead of either of the Hartnell runners all season.

“That’s one of the most exciting moments in my coaching career so far,” Burns said. “You make all these plans and then you … go execute the plan to a T and then exceed it, it was so exciting.”

It was quite a finish to Dorn’s community college career, considering she is relatively new to the sport of cross-country. A graduate of Westmoor, Dorn’s high school coach, Ron DiMaggio, said her 2021 season is the equivalent to a high school senior season. This is because Dorn only took up the sport as a high school sophomore and didn’t get serious about it until her junior year.

“She’s a diamond in the rough,” DiMaggio said.

Dorn had little in the way of proper technique when she joined the Westmoor team, DiMaggio said. Whereas many competitive cross-country athletes grow up running, and come from families of runners, Dorn — the second of three sisters — was the first in her family to don competitive running shoes.

“When Shannen came out as a sophomore, she had horrible racing form, but she just had an incredible desire just to get better,” DiMaggio said. “And with her desire, as a sophomore, first time out she did very, very well.”

She emerged as a junior in 2017, placing 12th for Westmoor in the Division II race at the Central Coast Section championships. The following season as a senior, she ran her way onto the podium with a fifth-place finish in CCS Division II, and advanced to the state finals for her first postseason competition at Woodward Park, where she cracked the top 100 in the Division II race, placing 96th in a field of 203 runners.

“We definitely needed to do some development,” Burns said of Dorn’s arrival at CSM. “I think [DiMaggio] did a great job of taking her and maximizing her will to compete and her willingness to train.”

Dorn’s sister Ericka is now following in her footsteps. As a sophomore at Westmoor, Ericka ran her way to a first-place finish in her first varsity race earlier this season at Crystal Springs. She went on to take 21st place in the CCS Division III finals Nov. 13.

“Her sister Ericka is exactly like Shannen,” DiMaggio said.

The elder Dorn now holds the distinction as the best CSM women’s runner in modern cross-country history. Her fifth-place medal marks the best finish of any CSM woman since at least 1977, when modern records begin.

While her community college cross-country career is over, Dorn still has some time left at CSM with track-and-field season on the horizon in the spring. Beyond the community college ranks, Dorn’s career may just be getting started as she intends to transfer to compete at a four-year school.

“After high school, I knew I wanted to compete at the next level,” Dorn said. “And I still do want to see where I can go after this.”

This entry was posted on Wednesday, December 1st, 2021 and is filed under Athletics, Cross Country. You can follow any responses to this entry through RSS 2.0. You can leave a response, or trackback from your own site.