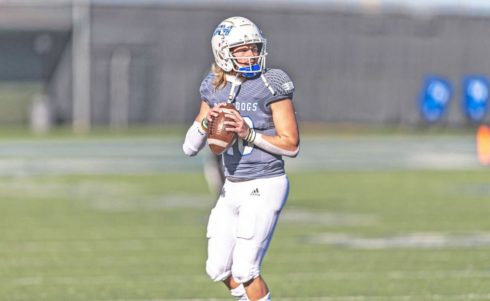 Quarterback Luke Bottari has only ever played organized school football in the city of San Mateo, first at Serra and then College of San Mateo. That will change Tuesday when he attends his first spring workout as a preferred walk-on at University of Utah. Photo by Patrick Nguyen.

Luke Bottari is a Utah Ute.

A San Mateo native who has played his entire organized football career in his hometown, Bottari made the whirlwind decision to transfer to the University of Utah last Friday. As a transfer junior from College of San Mateo, the quarterback will join a Utah team as a preferred walk-on.

“I think it’s a place that I really want to be,” Bottari said. “It will get me out of the Bay Area. I’ve been there my whole life. … They’re a winning program. They obviously just won the Pac-12. There’s a lot of stability. Coach (Kyle) Whittingham has been there a while. … And the team culture, everybody seems really close, a lot like CSM.

“And I think, lastly, just the environment they’re going to be in,” Bottari said. “You have the whole state of Utah behind you.”

With two official preferred walk-on offers on the table — the other one was from Cal — Bottari said he made the decision to commit to Utah last Friday at 11 a.m. He woke up early that morning and headed to CSM’s College Heights Stadium for a throwing audition for University of Nevada, Reno coaches Derek Sage and Nate Costa.

The audition did not benefit Bottari, but he said he hopes it garnered consideration for some of his passing targets. Five CSM receivers were part of the throwing session, including wide receiver Reymello Murphy and tight end Kevin Sielski.

Utah seems like a natural fit for Bottari, as his family owns a vacation home in South Jordan, Utah, approximately 20 miles south of the Salt Lake City campus. He will be a second-generation Ute, as his mother Natasha was a collegiate swimmer at Utah for two seasons before transferring academically to Cal.

The Bottaris actually moved to their Utah vacation home fulltime in 2020 at the start of the COVID pandemic. Thanks to flight benefits from a family member who works for a major airline, Bottari commuted back to the Bay Area on weekends — approximately every third weekend, he said — until moving back to San Mateo in October 2020.

“We basically moved out here (to Utah) during COVID and I was flying back here to throw with my guys on weekends,” Bottari said.

Bottari had no Division I football offers out of high school in 2019 despite etching his way into the Serra record books as the program’s all-time career passing yards leader.

Now, he will hit the ground running at Utah, where the spring semester began last week, Monday, Jan. 10. Bottari signed up during the late enrollment period and will take his first class Tuesday at 10 a.m. His first order of business on campus, however, will be to report to the football facility Tuesday at 8 a.m.

Utah is quite a prestigious football destination, with the Utes fresh off an appearance in Rose Bowl Jan. 1, a dramatic 48-45 loss to Ohio State.

Utah’s starting quarterback Cam Rising is set to return in 2022 for his junior season. The Utes also had two freshman quarterbacks on roster in 2021, including Bryson Barnes — himself, a walk-on at Utah — who entered the Rose Bowl late in the fourth quarter due to an injury to Rising, and threw a touchdown pass with less than two minutes to play that, at the time, tied the game 45-45.

Bottari still has a redshirt season available. With another incoming quarterback in spring camp, the depth chart for Utah is five quarterbacks deep, Bottari said.

“Well, all I can really ask for is a chance to compete, and that’s what I’m going to get,” Bottari said. “It will shake itself out through the spring and when we get into fall camp.”

This entry was posted on Tuesday, January 18th, 2022 and is filed under Athletics, Football. You can follow any responses to this entry through RSS 2.0. You can leave a response, or trackback from your own site.