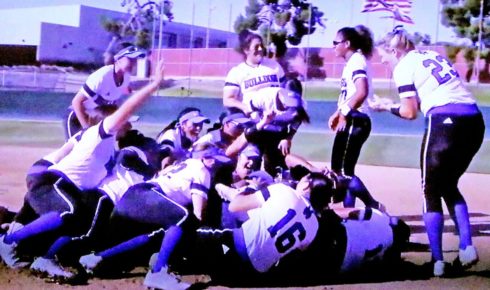 The Bulldogs celebrate after winning the CCCAA softball championship Sunday in Bakersfield. Photo from BAOSN

After a decade of dominance in Northern California and just as equally long a presence in the state tournament, one that saw it make the state championship tournament eight years in a row, College of San Mateo softball can finally add that one piece of hardware missing from its trophy collection: a California Community College Athletic Association state championship following an 8-1 win over Sierra at Bakersfield College Sunday afternoon.

It wasn’t easy as Sierra forced the deciding winner-take-all finale in Sunday’s final day of the tournament.

But CSM showed, as it has throughout the 2022 state tournament, that the most resilient is usually standing at the end.

CSM (44-4), using the momentum gained in a Game 1 7-6 loss Sunday morning, jumped on Sierra right away in Game 2, scoring five runs on five hits in the bottom of the first inning.

And the Bulldogs didn’t rest on their laurels, adding on throughout the game to keep the pressure on the Wolverines. CSM added a run in the bottom of the fourth and two more in the sixth.

That gave Kealani Cardona, a third-year sophomore, the win in the pitcher’s circle. Having battled and grinded through five starts against the best offenses the state has to offer, Cardona did not have her best showing at the state tournament.

But she saved her best performance for last as the 2019 Hillsdale graduate tossed a complete game, giving up one run, which was unearned, while scattering five hits.

She got plenty of help from her defense as the Bulldogs managed to turn a pair of double plays. In the top of the fourth after booting a ground ball, CSM second baseman Celeste Casillas redeemed herself right away, fielding a grounder, tagging out the runner who had reached on her mistake and then throwing out the batter at first for the twin killing. In the top of the sixth, the Bulldogs turned a more routine 4-6-3 double play to end a potential Sierra threat.

Sunday’s win capped an epic run by the Bulldogs. CSM, the No. 1 seed in the North and ranked No. 3 in the state in the final regular season poll, won its first two games of the tournament, twice rallying from first-inning deficits to move into the winner’s bracket final. Facing reigning state champion Mt. San Antonio College Saturday, the Bulldogs gave themselves a little leeway in the championship series after dispatching the Mounties 4-1.

Sierra, on the other hand, took the hardest route possible. The Wolverines were dropped into the loser’s bracket immediately after falling 8-5 to Cypress in the first round. Sierra proceeded to win four straight games, back-to-back doubleheaders on Friday and Saturday, eliminating Mt. SAC 4-2 in the final of the loser’s bracket Saturday night for the right to play CSM in the championship series.

The Wolverines ran their run to five straight wins as they jumped on the Bulldogs right away, scoring twice in the top of the first inning in Game 1 Sunday. They added three more in the third and two more in the sixth for a 7-0 lead.

But the Bulldogs, as they showed all tournament long, battled back. It was a Sarah Giles two-run home run in the bottom of the sixth that seemed to wake CSM’s slumbering lumber. The Bulldogs rallied for four more runs in the bottom of the seventh and had the tying run at third when Sierra got the final out to force Sunday afternoon’s Game 2.

But CSM’s late-inning offensive surge was not quieted during the half-hour break between games 1 and 2. After Cardona wiggled out of a two-on, one-out jam to open the final game, the CSM offense picked up where it left off in Game 1.

Lafu Malepeai led off with a single and Logan Bonetti was hit by a pitch. Giles used a sacrifice bunt to move the runners up. The next three Bulldog batters — Bubbah Fa’aita, Chloe Moffitt and Gaby Perez — all singled in runs.

Moffitt would score the Bulldogs’ fourth run on a throwing error and Casillas rounded out the scoring with an RBI double.

Like she has done all tournament, Cardona battled the Sierra batting order. She retired the side in order in the second before Sierra got to her in the third. With one out, an error at second base opened the door for the Wolverines, who would cash in that mistake on a Darcy Gillan RBI double, cutting CSM’s lead to 5-1.

But Cardona kept dealing. The double play turned in the top of the fourth proved to be big as Sierra came up with a single immediately after. But she was stranded when a pop out ended the inning.

The Bulldogs tacked on a run in the bottom of the fourth when Malepeai walked, stole second and scored on a Giles single to center for a 6-1 lead.

The Wolverines left two runners on base in the fifth and Cardona went 1-2-3 to end the sixth. The CSM offense then put the game away in the bottom of the sixth on a Malepeai solo home run to right field and an RBI single from Moffitt.

The win over Sierra for the state title was made even more satisfying for the Bulldogs as they managed to avenge the three teams that beat them this season. In the first game of the Super Regional, Sac City handed CSM just its third loss of the season. The Bulldogs would sweep the final two games to make it to the state tournament for the eighth straight season.

In the winner’s bracket final, the Bulldogs topped Mt. SAC. Then, after dropping to 0-2 against Sierra this season with the Game 1 loss, the Bulldogs finally got the ultimate revenge by beating the Wolverines in the game that mattered the most.

This entry was posted on Monday, May 23rd, 2022 and is filed under Athletics, Headline, Softball. You can follow any responses to this entry through RSS 2.0. You can leave a response, or trackback from your own site.