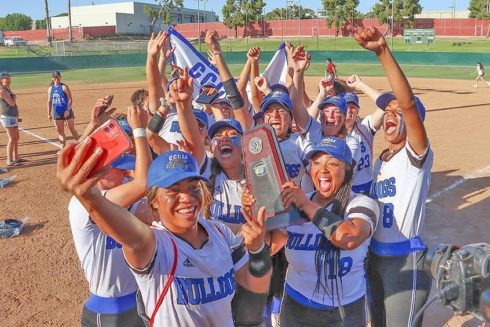 The College of San Mateo softball celebrates the school’s first-ever state title in the modern era in the 100th season of CSM athletics and 50 years since the passage of Title IX, which allowed females to participate in athletics. Photo by Richard Quinton/CCCAASports.org

The CSM softball team Sunday won the school’s first-ever state championship in the modern era following an 8-1 win over Sierra College in the championship game of the California Community College Athletic Association at Bakersfield College.

The title capped the 100th season of CSM athletics.

It had been 60 years since the Bulldogs captured a crown in any CCCAA affiliated sport — the 1962 men’s golf team was the Bulldogs’ last state champion. San Mateo won the State Athletic Committee’s golf tournament that spring (led by individual medalist Tom Brigham), capping a run of four straight and six overall golf titles from 1952-1962

In the early years, the Bulldogs did claim unofficial state championships in football and basketball. CSM also had a national/Olympic level track program before there was CCCAA organized state competition that started in the 1950s. 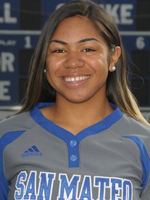 In five games, Malepeai, who was named San Mateo Daily Journal Athlete of the Year following her junior year at South City in 2019, went 11 for 18, good for a batting average of .611. Five of her hits went for extra-base hit with two doubles, a triple and two home runs. She had eight RBIs, scored seven runs and stole three bases.

The Coast Conference champion Bulldogs finished with a 46-4 record and ended up avenging losses to the three teams that beat them this season.

Sac City’s 6-4 win in Game 1 of the super regional snapped CSM’s 29-game winning streak and was its first loss since Feb. 19. The Bulldogs went on to sweep a doubleheader from the Panthers to qualify for the state tournament.

In the winner’s bracket final, CSM took down Mt. San Antonio College, which beat the Bulldogs 6-5 in their season opener Jan. 29.

CSM’s 4-1 win in the state tournament avenged that loss.

In the championship series, Sierra beat CSM for the second time this season, adding a 7-6 playoff loss to the 2-1 defeat the Wolverines hung on the Bulldogs that day in February.

But CSM got the biggest win when it needed it the most, defeating Sierra for the first time this season in the state championship game, 8-1.

This entry was posted on Wednesday, May 25th, 2022 and is filed under Athletics, Awards, Headline, Softball. You can follow any responses to this entry through RSS 2.0. You can leave a response, or trackback from your own site.