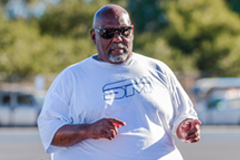 “Coach O” is being inducted into the College of San Mateo Athletic Hall of Fame. And — as most anyone from the athletics community on the Hilltop will undoubtedly concur — it’s about time.

Larry Owens served as CSM football head coach for 21 years, retiring from the post following the 2017 season. Other than his predecessor, the legendary Tom Martinez, is there another name more synonymous with Bulldogs athletics?

Owens is now set to be inducted into the CSM Athletic Hall of Fame in an official ceremony Sept. 2. It is the community college’s first such ceremony in four years, due to delays caused by the COVID pandemic. He is one of 19 individuals set for induction, in addition to four Bulldog Legends, one Bulldog Service Award and a team induction for the 2015 softball team.

“He is the Godfather of the CSM football program,” said Tim Tulloch, CSM’s current football head coach. “He is everything our program is about.”

“The Godfather” might be an appropriate description, but Owens is synonymous with his nickname “Coach O.”

Originally hired by Martinez in 1983 as an assistant coach, Owens worked on Martinez’s coaching staffs with both the football and softball teams. This cycle continued when Owens hired Tulloch as a football assistant coach in 1997. Tulloch has been coaching with the Bulldogs ever since and was promoted to head coach in 2018 after Owens stepped down from his second tenure running the program.

Of the 24 inductees into the CSM Hall of Fame class of 2022, five of them played for Owens — footballers Ryan Boschetti, Paul Bradford, Dave Hanson and Ray Hisatake — while Christie McCoy played for him with the softball team. Current softball head coach Nicole Borg, who headed the 2015 softball team, was also a player during Owens’ coaching tenure on the diamond.

Six of the current coaches on the CSM football staff — including assistant head coach Bret Pollack, who served as head coach from 2009-15 — also played for the Bulldogs.

“When you’re winning, everyone wants to be a part of it,” Owens said. “It goes hand in hand with winning … but I think also Tim and the coaches in the past, they’ve made it fun and enjoyable. You don’t really want to leave. It was really that way when Tom Martinez was the coach. He made it fun and made it enjoyable … and that’s why I came back.”

That’s just to name a few.

“I couldn’t count them all and I wouldn’t want to,” Owens said.

A graduate of Sequoia, Owens went on to play at CSM before transferring to Long Beach State. He coached on Martinez’s staff at CSM from 1983-88 before stepping away from the program for one year. In 1990, he was hired to take over as CSM football head coach from Jack Thur.

“I was young and inexperienced,” Owens said. “There was, I know for a fact, much more experienced guys. But I’m just thankful Coach Martinez and Gary Dickey the athletic director gave me an opportunity there.”

Owens said he put additional pressure on himself in taking over the program. As one of three Black community college football coaches throughout Northern California, he felt compelled to succeed, as not to let anyone down, he said.

“For them to give me the opportunity, that CSM gave me to be a head coach was tremendous, because back in those days you didn’t see too many African American coaches in all of football,” Owens said.

Owens did not step away from the football program after stepping down as head coach following the 2017 season — a season that ended in a disappointing 16-12 loss to Fullerton in the California Community College Athletic Association State Championship game — as he has continued to serve as special adviser to the head coach and the defensive line coach.

Tulloch, whose son Owen is named after Owens, said the soon-to-be CSM Hall of Famer is still a huge part of the football program.

“The first time you meet Coach O,” Tulloch said, “you just feel — he talks to you, and you feel just his demeanor and his way, and just how genuine he is and just how much he cares about people.”

This is in line with how Owens ultimately sees his legacy.

“That’s hard to say,” Owens said. “Hopefully that I did a good job, and I held the line for what CSM coaches in the past had done. I didn’t want to embarrass the school or the people. Hopefully I’ll leave a legacy that I was a good man and a good coach and a good person. That’s more important to me than anything.”

Even with former CSM coach Dick Vermeil set to be inducted in the Sept. 2 ceremony — the former Philadelphia Eagles head coach was also inducted into the Pro Football Hall of Fame earlier this year — you’d be hard-pressed to find anyone who doesn’t see Owens as the headliner of the 2022 CSM Athletic Hall of Fame class.

“I think everybody kind of has to be themselves but I’m an absolute disciple of Coach O, as is everyone on our staff,” Tulloch said. “There’s a certain way that you do things here and it’s the right way. Even if it’s hard, even if it’s uncomfortable, even if it challenges you — you don’t feel like doing it — I hear Coach O constantly in my head and in my voice: ‘This is how we do things.’”

A total of 24 inductees — 23 individuals and the 2015 softball team, will be honored. The CSM Hall of Fame inductees are:

Tickets for the event are $75 and can be reserved at collegeofsanmateo.edu/hof.

This entry was posted on Monday, August 22nd, 2022 and is filed under Athletics, Awards, Football, Headline. You can follow any responses to this entry through RSS 2.0. You can leave a response, or trackback from your own site.