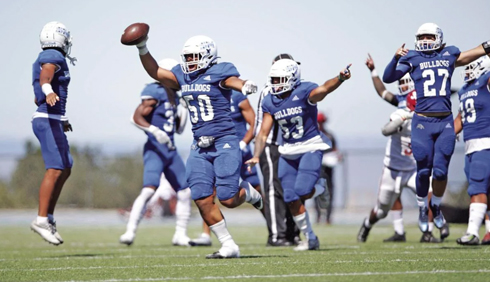 Quincy Likio comes away with a fumble recovery in the third quarter of College of San Mateo’s 45-28 win over Sierra in Saturday’s season opener at College Heights Stadium. Photo by Patrick Nguyen.

Sometimes the best offense is a good defense.

The College of San Mateo Bulldogs recovered three fumbles, including two highlight-reel forced fumbles, to take control of Saturday’s community college football opener at College Heights Stadium. After a runaway fourth quarter, the Bulldogs (1-0) claimed a 45-28 victory over visiting Sierra College-Rocklin. But only after CSM came out on the short end of a 13-10 halftime score did the ’Dogs’ defense seize the day.

Trailing by 3 in the opening minutes of the second half, three Bulldogs defenders — linebacker Malik Johnson, defensive back Tyrice Ivy Jr. and lineman Quincy Likio — stood up a Sierra rusher at the Wolverines’ 41-yard line, and another body in the person of defensive back Fynn Williams came flying in to add a fourth, allowing Likio to strip the ball loose and give CSM the ball in Sierra territory.

“The way they run to the ball and swarm in and are attacking the football, it can change games,” CSM head coach Tim Tulloch said.

Five plays later, the Bulldogs took the lead on a 5-yard run by Ezra Moleni. Another Sierra fumble gave the ball right back to the Bulldogs, and this time quarterback Richie Watts galloped in for a 1-yard touchdown to stake CSM to a 24-13 lead.

Sierra (0-1) closed it to 24-21 by the end of third quarter on Michael Wortham’s 9-yard touchdown pass, the sophomore quarterback’s second of the day. But the Bulldogs got the jump on the Wolverines in the fourth quarter with scoring runs on back-to-back drives from Moleni and starting quarterback Anthony Grigsby and went on to win the final 15 minutes 21-7.

While Grigsby stabilized the offense with some precision passing — going 7 of 9 with 77 yards and a touchdown through the air — the Bulldogs rallied behind the straight-ahead ground game. Sophomore running back J’Wan Evans was a force, totaling 16 carries for 123 yards. Moleni added nine carries for 88 yards and two touchdowns, as CSM out-rushed Sierra 228-179.

“The combination of J’Wan Evans and Ezra Moleni, the physicality of those two guys, they’re not 230-pound backs but they run big, they run hard,” Tulloch said. “Our deal for them is it’s not how many touchdowns you score, it’s how many tackles you break. … We put one (fumble) on the ground, which we have to clean up, but other than that I felt good about how hard they ran and the decisions they made in the run game.”

Sierra out-gained CSM 437-352 in total yards. And early on, the Wolverines had the Bulldogs in fits, taking the lead on their first possession with a short scoring pass from Wortham to Eli Mirza on a soft loft into the corner of the end zone. Sierra reupped 13-7 on Wortham’s 13-yard scoring run with 1:17 left in the opening quarter.

Only a dazzling kickoff return by Evans, who responded to Sierra’s first score by going coast-to-coast for a 95-yard touchdown run-back kept the Bulldogs in reach in the early going. 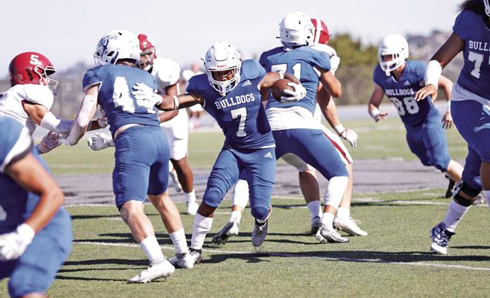 CSM sophomore J’Wan Evans rushes the ball for one of his 23 carries for 123 yards Saturday in San Mateo. Evans also popped a 95-yard kickoff
return for a touchdown in the Bulldogs’ season opener. Photo by Patrick Nguyen.

But the Bulldogs rode another dazzling play into halftime, as sophomore placekicker nailed a 45-yard field goal with 20 seconds remaining in the half to send CSM into the locker room with some wind in its sails.

“I probably would have sent him out at 65,” Tulloch said.

Grigsby settled in during the second half. The freshman hadn’t played in an organized football game in two seasons since the spring of 2021 at Cosumnes Oaks-Elk Grove, some 35 miles south of Sierra College. He is one of four quarterbacks in the mix for CSM, and one of two who received playing time Saturday.

Grigsby had a few short completions in the first half, but in the second half he really started threading the needle. His first pass of the half found Jamai East for 19 yards. Late in the fourth quarter, he connected with East on a 29-yarder to set up the day’s strangest score, a fumbled snap inside the Sierra 5 that Grigsby scooped up and ran in for the touchdown to make it 38-21.

CSM’s final play of the day was a 14-yard scoring strike from Grigsby to East with a minute left to play. East finished with five catches for 78 yards.

“With the athletes and the receivers that we have, we have a bunch of dawgs,” Grigsby said. “Every one of our receivers is quick, shifty, they can all go up and get the ball. They’re all athletes and they can just play. … I trust in all my guys, honestly. There’s not one guy on our wide receiver corps, our tight end corps, that I don’t trust in a one-on-one situation.”

Freshman cornerback Demetrius Freeney also recorded a forced fumble, stripping a Sierra receiver after a 16-yard catch on the CSM sideline in the fourth quarter.

“That’s the biggest thing, especially you see early in the season,” Tulloch said. “Our defensive coaching staff … they do such a great job teaching attacking the football … and they live that. And when it shows up in a game like this, which is back and forth and back and forth … that’s a huge momentum swing for us.”

Johnson, who was in on the first forced fumble, said it’s a point of pride for the CSM defense.

“We’ve got a turnover belt that we haven’t brought out yet, but I felt the excitement on the sidelines,” Johnson said.

A redshirt freshman who hasn’t played in an organized game since the 2018 high school season at Menlo-Atherton, Johnson said the CSM defense is content to strip its way through college.

“We’re always told to tackle, and once we wrap up the second and third guy come in there and strip the ball out,” Johnson said. “So, that’s what we did.”

The matchup between Sierra and CSM is the first between the two teams since 2017, when the Bulldogs traveled to Rocklin for a thrilling 37-36 victory. In that game, while Bulldogs quarterback Shawn Akina was busy throwing for 422 yards, a sophomore receiver by the name of Brandon Aiyuk totaled five catches for 116 yards and two touchdowns for Sierra.

This entry was posted on Tuesday, September 6th, 2022 and is filed under Athletics, Football, Headline. You can follow any responses to this entry through RSS 2.0. You can leave a response, or trackback from your own site.