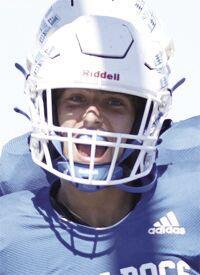 In Saturday’s first road game of the year, the Bulldogs mauled College of the Sequoias in 45-21 victory at Mineral King Bowl. CSM (2-0) has now outscored two opponents by a cumulative 90-49 to start the year with two straight wins.

In his first collegiate start, freshman quarterback Richie Watts was 16-of-23 passing for 246 yards and two touchdowns, leading the Bulldogs to a fast 31-0 first-half lead. The previous week in CSM’s win over Sierra College, Watts split time at QB with freshman Anthony Grigsby. This week, it was all Watts under center.

“He did an outstanding job,” Tulloch said. “He took control of the game, led the team, did a great job of throwing the ball, protecting the ball … and he really managed the offense.”

As evidenced by CSM outgaining Sequoias 434-278 in total yards, the Bulldog defense had a big hand in the victory as well. After Watts engineered a 75-yard scoring drive on CSM’s first possession, the Dogs’ defense scored two plays later when sophomore cornerback Justin Sinclair stepped in front of a Nathan Lamb pass and returned it 40 yards for a pick-6 score.

“Last year he got beat on that route … same team, same route,” Tulloch said. “And through film study and his maturity as a player, he read it … and he was making them pay for it. He stepped in front of it and took it 40 yards to the house.”

The defense provided two CSM scores in the first half. The other came to start the second quarter. After the Bulldogs took a 21-0 lead on a 33-yard touchdown run by sophomore J’Wan Evans, the Giants coughed up the pigskin on the next play from scrimmage, with sophomore Marcellus Eison stripping the ball and freshman defensive tackle Noa Ngalu scooping it up for a touchdown, upping the lead to 28-0.

“When you can score twice on defense, that’s a great thing,” Tulloch said. “The first week, turnovers were huge for us … and we’ve been able to carry that over into this week. Turnovers and turnovers with scores — and that’s a huge thing momentum wise.”

A few minutes later, sophomore kicker Gabe Plascencia made it 31-0 with a 40-yard field goal. Sequoias went on chip away with three scores by AJ Dixson. He ran for touchdowns of 3 and 1 yard. CSM answered with a 6-yard scoring pass from Watts to Colin Giffen. But Sequoias fired right back, making it 38-21 on a touchdown pass from Lamb to Dixson with 10:11 to play.

Sequoias (1-1) had a chance to close it to a two-score game on a 35-yard field goal try with 7:55 to go, but the attempt sailed wide left. The Bulldogs then put the game away with a fast four-play, 80-yard drive, capped by a 62-yard touchdown strike from Watts to Brian Pierce (two catches for 70 yards).

“They had scored a couple times and they had taken momentum back their way,” Tulloch said. “Then Richie hit Brian on a big pass that basically put it on ice.”

But the early tempo of Watts and the Bulldog offense set the tone for the game.

On CSM’s first drive, Watts connected with running back Ezra Moleni, turning third-and-12 at the Bulldogs’ 38 into a screen pass for a 38-yard pickup. Five plays later, Moleni (18 carries for a game-high 94 yards) scored a 3-yard run to put CSM on the board.

“They’re few and far between,” Tulloch said of the 97-yard scoring drive. “I can’t remember many of them but they’re awesome when you have them.”

This entry was posted on Monday, September 12th, 2022 and is filed under Athletics, Football, Headline. You can follow any responses to this entry through RSS 2.0. You can leave a response, or trackback from your own site.