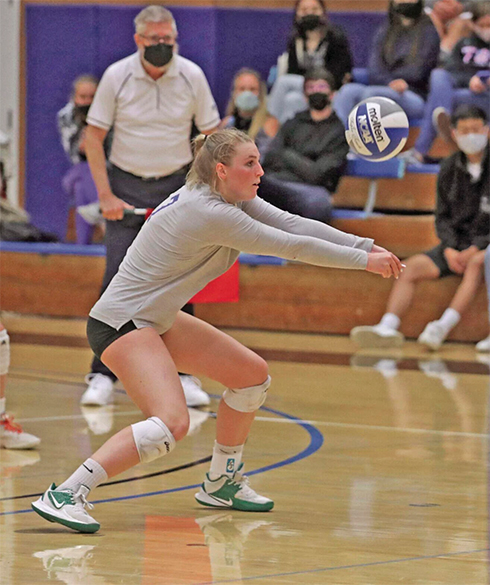 CSM’s Naomie Cremoux, who led the Bulldogs to a pair of wins last week, is ranked sixth in the state in kills per set with 10.3.

Riverside City College (3-0) is the new No. 1 team this week in the coaches poll of California Community College Athletic Association football teams, conducted by the JC Athletic Bureau, after last week’s No. 1 team, City College of San Francisco lost.

College of San Mateo (3-0) moved up to No. 2, as the top team in Northern California.

Now No. 8 Butte (2-1) ended the state and national-leading 16-game winning streak of reigning state champion CCSF, 35-14, on Saturday to trigger the poll change. City College fell to No. 9 this week.

The early season top spot in Southern California could be determined Saturday when No. 1 Riverside, the 2021 state runner-up, visits No. 3 Golden West.

Cañada saw its undefeated streak to start the season snapped with a 1-0 loss at Modesto last Friday. Cañada (4-1) out-shot Modesto (1-4), 7-4. Modesto goalkeeper Willow Stearns kept a clean sheet to give the Pirates their first win of the season.

The Colts opened the season 4-0, including a 1-0 win at Las Positas when Yara Gomez-Zavala scored an unassisted goal in the 90th minute to give Cañada the win Sept. 13.

Skyline (2-1) suffered its first loss of the season Monday, falling to Sacramento City 3-1.

All four goals were scored in the first half, with Dominique Garibay converting an Andrea Ventura assist into the Trojans’ lone goal.

Skyline (4-0) has blasted out to an undefeated start to the season, posting a pair of six-goal wins last week to put the Coast Conference-North on notice.

Through four games, the Trojans have outscored their opponents 17-3. They beat Mendocino 6-0 Sept. 14 and followed that with a 6-1 win over Siskiyous last Friday.

The Trojans fell behind 1-0 to Siskiyous, but ended up scoring four first-half goals to take control. Jiovanni Rico Contreras scored a pair to lead the Trojans.

Kiichi Murakami gave the Colts a 1-0 lead in the first minute, but Santa Rosa equalized right before halftime and scored the game-winner 11 minutes into the second half.

Fresno scored a pair of second-half goals to send Cañada to its third-straight loss.

College of San Mateo, ranked No. 6 in the state, won a pair of matches last week to improve to 7-3 on the season.

Naomie Cremoux, who ranked sixth in the state in kills per set (4.45) and is No. 9 in overall kills with 138, led the Bulldogs to the pair of wins. She had 25 kills and 16 digs against Sierra and 13 against De Anza.

CSM setter Angelina Estrada, who is ranked first in the state with 10.3 assists per set, pumped out 51 assists and also had 14 digs against Sierra. In the win over De Anza, Estrada had 36 assists.

California Community College Football Coaches, with first-place votes in brackets, won-loss records, total points (based upon 25 points for a first-place vote through one point for a 25th-place vote), and previous ranking (PR).

This entry was posted on Wednesday, September 21st, 2022 and is filed under Athletics, Football, Uncategorized, Volleyball. You can follow any responses to this entry through RSS 2.0. You can leave a response, or trackback from your own site.