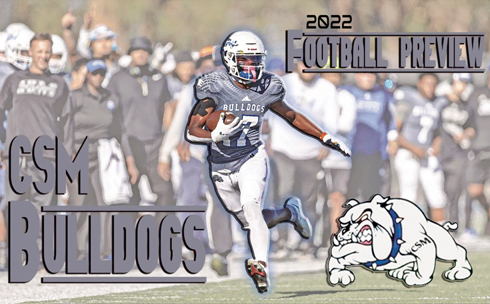 It’s a typical weekday at College Heights Stadium and the College of San Mateo Bulldogs are winding down their afternoon football practice in style.

As a rotation of four freshman quarterbacks take pressure-cooker goal-line intrasquad reps, the “chop chant” rains down on the 22 Bulldog players going head-to-head. And as Raymond Price III completes a 10-yard touchdown pass over the middle to sophomore Reymello Murphy, one might think, for all the spirited celebration, the Bulldogs just scored a game-winning touchdown.

“When you feel the energy in practice, it’s really fun as a coach,” Bulldogs head coach Tim Tulloch said. “Because it’s competitive. When guys come out here, they’re flying around, they’re challenging each other. And when they love this part of it — I think great practices and great work on the field translates into great performances on game day.”

There’s an expectation of greatness at CSM, and for good reason. Until the Bulldogs lost last season’s Nov. 13 regular season finale to City College of San Francisco, they had won 24 straight games in Bay 6 Conference play dating back to 2016, along with four straight Bay 6 titles from 2016-19.

This season, CSM is tasked with replacing quarterback Luke Bottari, who had the starting job on lockdown for two seasons until transferring to University of Utah after leading the Bulldogs to the 2021 Northern California championship game. Bottari’s backup, Richie Lankford, is a sophomore this year, but got plucked by the NCAA Division I ranks as well, transferring to Georgia Southern.

“It is a wide-open competition,” Tulloch said. “And we have some young guys that have been in the program, so at least there’s some familiarity with what we do. But whoever takes the first snap on Saturday the 3rd, it’s going to be his first college snap, period. So, there’s no returning game experience, and that’s kind of been how this team is across the board.”

Whoever QBs, he’ll be throwing to a veteran corps of receivers. While CSM’s two top receivers — on an offense that ranked seventh in the state averaging 37.8 points per game — have transferred on, the sophomore trio of Murphy (Rancho Santa Margarita), Jayden Dixon-Veal (Rancho Cucamonga) and Nate Sanchez (Serra) each took regular game reps last season.

But the Bulldogs’ bread-and-butter in 2021 was on defense. CSM led the state, averaging 11.0 points allowed per game.

CSM faces a similar turnover in replacing All-American linebacker Demarii Blanks. There’s core leadership, Tulloch said, in returning linebacker Taniela Latu (Serra), as well as defensive lineman Kavika Baumgartner (Clayton Valley) and defensive back Justin Sinclair (Mountain View). Add a late transfer from University of Washington in the person of defensive tackle Noa Ngalu (Menlo-Atherton), who is sure to have an impact.

The Bulldogs’ secondary has long prided itself on pro-style man-to-man, 1-on-1 coverage. And this year is no different. This allows linebackers to play fast, furious, and physical — in other words, one fun brand of football.

The “chop chant” will see its first game action in 2022 when the Bulldogs host Sierra Saturday at 1 p.m.

“They’ve been doing that for years,” Tulloch said. “They do that every time in practice when they want to put pressure. … It’s good, it’s fun, and it just brings that juice in our practices.”

As for what to expect under center, CSM, in typical fashion, is keeping its personnel decisions close to the vest.

“Really all four guys can lead our offense,” Tulloch said. “They all are different, but they all have winning intangibles. I’m just excited to see these guys play.”

This entry was posted on Friday, September 2nd, 2022 and is filed under Athletics, Football, Headline. You can follow any responses to this entry through RSS 2.0. You can leave a response, or trackback from your own site.