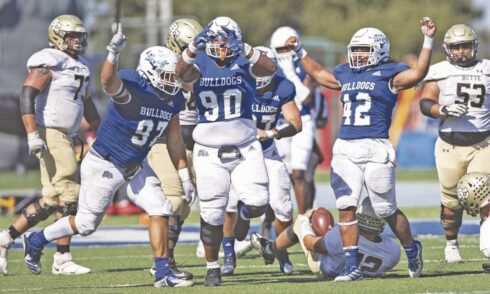 There’s only one 5-0 community college football team in Northern California, and that team is the College of San Mateo Bulldogs.

CSM (5-0) wrapped up its challenging non-conference schedule Saturday at College Heights Stadium with a 28-21 victory over Butte College. The ’Dogs have a bye this week before Bay 6 Conference play opens Saturday, Oct. 15, at home against Laney College at 1 p.m.

The Bulldogs have won 15 straight regular-season non-conference games dating back to 2019, but this year’s slate of Sierra, Sequoias, Modesto, American River and Butte was their toughest slate yet, according to CSM head coach Tim Tulloch.

“All five of those teams were in bowl games last year, and they’re all really good teams this year,” Tulloch said. “So, it’s a grinder of a schedule. And then our next two, you go into league, it’s Laney [and Diablo Valley College]. We have seven teams that were in bowl games in a row. Nobody has that kind of schedule.”

Sophomore running back Ezra Moleni totaled 19 carries for 171 yards and three touchdowns, including 10 touches on CSM’s opening drive of the game. It was 16-play, 75-yard grind that included three third-down conversions, and one on fourth down, before Moleni punched it in for a 2-yard score. The possession took 9 minutes, 23 seconds off the scoreboard.

But it wasn’t until early in the fourth quarter that the Bulldogs seized control of the tempo of the game.

Butte (3-2) cashed in with a long drive of its own, going 66 yards on 15 plays to score with 3:02 left in the first half. The Roadrunners totaled three fourth-down conversions on the drive, the last one coming on fourth-and-1 from CSM’s 23-yard line, when Caleb Ramseur glided off tackle to go untouched until his headlong dive across the left pylon to tie it 7-7.

CSM’s special teams answered when kickoff returner J’Wan Evans turned a near disaster into a big play. Butte’s kick got caught in the wind and bounced between the Bulldogs’ two returners near the 10, leaving Evans to backtrack to pick it up. But the sophomore turned up the field and advanced it 30 yards to the Roadrunners’ 41.

“He’s a guy, we want to find opportunities to get the ball in his hands, in space,” Tulloch said. “And he’s just explosive, and he has great vision. And that comes into play a lot of kickoff return. He can use that running back vision as far as finding seams and creases, and he has the speed to take it the distance.”

Moleni then rattled off runs of 14, 12 and 2 yards before freshman quarterback Richie Watts connected with Evans for a 31-yard scoring pass with 1:04 left in the half, giving the Bulldogs a 14-7 lead going into halftime.

Butte fired right back to open the second half. Ramseur totaled 24 carries for 148 yards in the game and opened the second half with an explosive 61-yard run. The sophomore added runs of 7, 2, 2, 3 and 2 yards, including fourth- and third-down conversions, before sophomore quarterback Tanner Hughes bootlegged in for a 3-yard touchdown to tie it 14-14.

But the Bulldogs’ defense hunkered down with three straight stops. CSM’s third-down blitz near midfield marked a turning point, as freshman linebacker Flynn Williams sacked Hughes to force a punt. Roadrunners punter Dante Jackson had the Bulldogs up against it when his 43-yard tumbler was downed at the CSM 6.

Then Moleni flipped the field, breaking off a 53-yard run to cross into Butte territory. Three plays later, Moleni gave CSM the lead with a 25-yard scoring run.

“The combination of [Evans] and what Ezra has been doing — I mean, those two guys, you have to account for them in the run game,” Tulloch said. “And if you don’t, those guys can get it done.”

The Bulldogs’ defense gave Moleni and company the ball right back. A gritty second-down stop through the middle by defensive tackle Alo Mata’u forced Butte to the air on third down. Then a blitz by freshman defensive back Demetrius Freeney forced Hughes to hurry an incomplete pass.

The Bulldogs took the ball back at their own 16. A 52-yard pass from Watts to sophomore Raymello Murphy set CSM in motion. And then the legs off Wes Brown extended the drive on a fake field goal with three minutes to play.

SM lined up for a 53-yard field goal try, with sophomore placekicker Gabe Plascencia a threat to convert from that distance. The Bulldogs, though, ran the trick play to perfection, with Brown scooting around the left side for an 18-yard pickup and a first down.

“I think if Gabe wasn’t a really threat then we’re not able to do that, at least from there,” Tulloch said.

Brown’s athleticism was the key to the play, Tulloch said.

“He’s a great athlete,” Tulloch said. “We have some really great athletes that get overlooked because they’re specialists. He could play tight end for us, he could play kickoff team. He’s a guy that can play a lot of different positions. He’s a phenomenal long snapper. He’s pound for pound one of the most athletic guys on our team.”

Two plays later, Moleni delivered his third score of the day with a 12-yard touchdown run.

Butte added a harmless touchdown with two seconds remaining in regulation, a 2-yard pass from Hughes to Jailen Hammer.

Watts finished the day with a team-high 179 total yards, including 9-of-16 passing for 153 yards and a touchdown. At the midway point of the season, the freshman leads the state with a 183.6 quarterback efficiency, along with a 72.5 completion percentage. He has thrown six touchdown passes and no interceptions.

This entry was posted on Monday, October 3rd, 2022 and is filed under Athletics, Football, Headline. You can follow any responses to this entry through RSS 2.0. You can leave a response, or trackback from your own site.