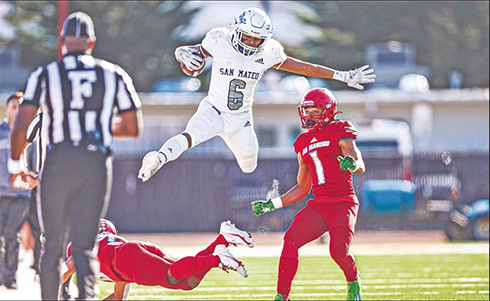 The College of San Mateo Bulldogs are Bay 6 Conference champions — a co-championship honor they will share with Laney College.

Entering Saturday’s regular-season finale in a three-way tie for first place with Laney and City College of San Francisco, the Bulldogs (4-1 Bay 6, 9-1 overall) rallied for a 31-13 win over CCSF at George M. Rush Stadium in San Francisco. Laney claimed a 35-0 win over Chabot to shore up the co-championship.

Riding a standout performance by their special teams, and the legs of running back Ezra Moleni, the Bulldogs took a 24-0 lead into the fourth quarter. The defense did the rest as CSM outgained CCSF 277-156 in total yards.

“Our conference is arguably the strongest conference in the state of California,” CSM head coach Tim Tulloch said. “Any time you can win conference, it’s something that our young men have a whole lot to be proud of. So, they were very happy.”

After CCSF (3-2, 6-4) went three-and-out on its first possession, CSM set up its first score on a blocked punt by Jovaughn Williams. The Bulldogs took over at the Rams’ 11-yard line, setting up a 32-yard field goal by Gabe Plascencia.

CSM added to the lead on the first play of the second quarter with a 30-yard touchdown pass from Richie Watts to Brendan Doyle. After trading three quick possessions, the Bulldogs took the ball back via punt at their own 20. Moleni and Watts marched CSM down the field for a 10-play, 80-yard scoring drive, capped by a 4-yard scoring run by Moleni.

Then, with five minutes to go before the half, the CSM special teams struck again when freshman Brian Pierce returned a punt 51 yards for a touchdown. Pierce made three tacklers miss and got some good blocks through the middle of the field.

“And BP did the rest,” Tulloch said. “He’s an electric-with-the-ball-in-his-hands type of kid.”

It was Pierce’s third touchdown of the year, and his first as a returner.

CCSF scored two quick touchdowns at the beginning of the fourth quarter. Freshman quarterback Jeremy Stephens got the Rams on the board with a 24-yard scoring run. Three plays later, the Bulldogs fumbled in their own territory, and the Rams scored on the following play with a 31-yard TD pass from Stephens to Daelin DeGraffe.

Watts and the Bulldogs answered back. The CSM defense pinned CCSF deep in its own territory, forcing the Rams to punt from their own 11. The Bulldogs used the short field to score with three minutes to go on a 1-yard sneak by Watts.

Sophomore running back J’Wan Evans made his first appearance in three weeks, taking just one carry out of the backfield. The key cog to the CSM machine is expected to play in two weeks when California Community College Athletic Association postseason play kicks off.

A bye week is scheduled for next week. It was an insurance policy implemented by the schedule makers at the beginning of the season in case any potential delays befell CCCAA football teams. Hardly any did, as just one regular-season makeup game is slated for next week — between College of the Siskiyous and Contra Costa — which was postponed due to the Mills Fire.

“When you have the schedule that we have … having a chance to get some recovery and some rehab prior to going into the playoffs is going to help,” Tulloch said. “Especially for the guys on the line of scrimmage. … It gives them a chance to catch their breath a little bit before we ramp up and go.”

This entry was posted on Monday, November 14th, 2022 and is filed under Athletics, Football. You can follow any responses to this entry through RSS 2.0. You can leave a response, or trackback from your own site.