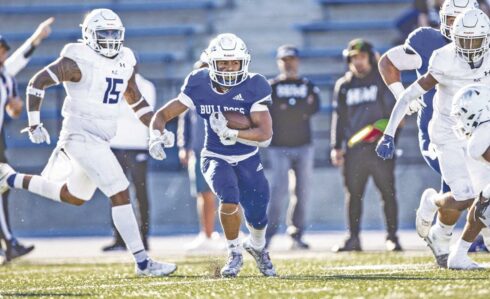 In the aftermath of 23-21 loss to Diablo Valley, the lone regular-season loss of the 2022 season, College of San Mateo head football coach Tim Tulloch summed up the team’s performance.

Since that week 8 loss Oct. 21, the Bulldogs have flipped the proverbially switch. CSM won its last three games of the season to garner the No. 1 seed in the California Community College Athletic Association Nor Cal regional playoffs.

Saturday, the train kept rolling. Hosting No. 4 Modesto at College Heights Stadium, the Bulldogs put on a dominating performance on both sides of the ball as they rolled to a 30-0 win over the Pirates.

“That bus ride home (after the loss to DVC) was long. (But) you saw the leadership rise. … I was happy to see, after the DVC game, our response,” Tulloch said after CSM (10-1) advanced to the Nor Cal championship game for the third time in four seasons (not counting the 2020 season postponement).

The Bulldogs responded to their only loss by winning their final three games of the regular season by a combined score 138-20 and it was more of the same against Modesto — a team CSM beat 35-14 in Week 3.

It was more of the same in the rematch and the disparity was staggering. The defense posted its second shutout in four games, holding Modesto (5-6) to just 142 yards. The unit forced three-and-outs five times and intercepted a pass on a sixth Pirates possession.

The CSM offense racked up 452 yards, split nearly evenly between passing and running. Quarterback Richie Wells was 20-for-25 for 228 yards and a pair of touchdowns.

“We put it in the hands of our offensive line. … I talked about this (during the week) about being more physical on the line of scrimmage.”

The Bulldogs also had a strong day on special teams. Kicker Gabe Plascencia set a new team career scoring record after kicking three field goals and three extra points. 12 points on the day gives him 176 for his career. He also had four touchbacks on seven kickoffs.

CSM set the tone on the opening kickoff when return man Nate Sanchez fielded the ball at the 20 and gave the Bulldogs great field position at midfield. The CSM offense then ground down the Pirates on the first drive of the game. Moleni carried six times for 29 yards on the drive and Watts mixed in three completions and a 9-yard scramble for a first down before hitting Jayden Dixon-Veal in the back right corner of the end zone for a touchdown.

It took them 11 plays to go 50 yards, taking more than eight minutes off the clock in the process.

CSM, however, misfired on its next couple of drives. The Bulldogs had their only punt of the game on their second possession and their third ended with a fumble at the Modesto 19-yard line.

On their final drive, the Bulldogs, starting from their own 40, drove to the Pirates’ 7, the key play being a 28-yard run from Sanchez, who started off left tackle, before cutting back to his right and taking it to the 10.

The Bulldogs ended up settling for a 34-yard Plascencia field goal for a 10-0 lead. The Modesto offense finally put a drive together in the final 1:34, moving from their 25 to the CSM 14. But the Bulldogs forced a 31-yard field attempt that was pushed wide left to keep the Pirates off the board and CSM leading 10-0 at halftime.

The CSM defense forced a Modesto three-and-out to start the third quarter, but the Bulldogs’ end-of-half struggles in the second quarter continued in the third.

But on the first drive of the second half, the Bulldogs showed their mettle. They moved from the 35 down to the 11, overcoming a pair of holding penalties and an offensive pass interference penalty to eventually come away with a Plascencia 28-yard field goal and a 13-0 lead.

“When you have penalties, you have to put them behind you,” Tulloch said. “I think everytime (we had a penalty on offense), we answered.

“No one blinked. No one flinched.”

That seemed to unlock the offense, because the Bulldogs were unstoppable the rest of the way. After another three-plays-and-punt by the CSM defense, the Bulldogs went back to work. Starting from the 25, CSM needed just eight plays to go 75 yards. Watts completed three passes for 58 yards — including a 38-yard circus catch by Fidel Pitts, who out-jumped the defensive back, went up with two hands, came down backward and held on for the first-and-goal at the Modesto 2. Moleni went in for the touchdown on the next play and it was 20-0 CSM.

Another Modesto punt was followed by another CSM touchdown, with Watts capping a six-play, 54-yard drive with a 20-yard scoring strike to Jeremiah Patterson in the left back corner of the end zone. Patterson did a tremendous job of re-adjusting his body — first looking over his right shoulder before switching to his left and making a basket catch for a 27-0 Bulldogs’ advantage.

Shamoun Duncan-Niusulu came up with an interception for the Bulldogs on the next possession, which they turned into a Plascencia 29-yard field goal with 5:23 left to play.

Modesto responded with its best drive of the half, moving into the CSM red zone with under two minutes to play. But the Bulldogs sealed the shutout by forcing an incomplete pass on fourth down with 43 seconds left to play.

This entry was posted on Monday, November 28th, 2022 and is filed under Athletics, Football, Headline. You can follow any responses to this entry through RSS 2.0. You can leave a response, or trackback from your own site.