CSM football back in win column with 637 yards of offense

The College of San Mateo Bulldogs were coming off their first stumble of the season, a disheartening loss to Diablo Valley that saw a potential game-winning field goal miss wide in the closing seconds. 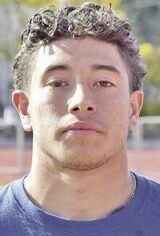 But the Bulldogs — in their final regular-season home game of 2022 — bounced back big time, rallying for their highest point total of the year Saturday at College Heights Stadium with a 63-7 lambasting of Chabot. It’s the same point total CSM hung on Chabot in last season’s 63-0 victory, but this one saw a much more potent offense.

The Bulldogs (2-1 Bay 6, 7-1 overall) gained 637 yards of total offense, the highest single-game total for the program since 2013, when CSM gained 675 yards in a 75-9 win over American River in the postseason Bulldog Bowl.

“The good thing for us right now is we had a good bounce-back game,” CSM head coach Tim Tulloch said. “When you take one on the chin, you find out a lot about yourself and the character and the make-up of the team. … It was good, we were able to get a win against Chabot and continue to try to grow and learn through all the ups and downs of the season.”

The Bulldogs scored on each of their first seven possessions in the first half and added a second-quarter pick-6 by Demetrius Freeney for good measure.

Sanchez — who entered the day with six carries for 62 yards on the season — exploded for a 76-yard scoring run in the first quarter to give CSM a 21-0 lead. He’d later add a 41-yard score en route to carrying five times for a career-high 162 yards.

“He’s just been steady about his approach and his work ethic, and finally got his opportunity and made the most of it,” Tulloch said.

Kuhn — who previously had three carries for 10 yards on the year — took 19 carries for a career-high 108 yards.

Sophomore running back Ezra Moleni — the Bulldogs’ leading rusher this season — added seven carries for 81 yards and two touchdowns, recording CSM’s first two scores of the day, each for 10 yards in the opening seven minutes of the game.

CSM now ranks fourth in the state averaging 204.9 rushing yards per game. The Bulldogs’ offensive line has been the driving force, consistently paving the way for various rushers. At the core is sophomore center Messiyah “Cheese” Moye, who captains the offensive line.

“He’s our leader,” Tulloch said. “He makes all our calls, he makes all our checks, and he just sets the tone for the offensive line. He’s just a great college football player.”

Freshman quarterback Richie Watts, like so many times this season, was the picture of efficiency. Watts was 10-of-11 passing for 162 yards with three touchdowns throws. Watts could have had a perfect day if not for a questionable call in the first quarter on a would-be touchdown pass that was caught in the end zone, only to have the receiver called out of bounds.

“He caught it and was in, and they called him out of bounds,” Tulloch said. “So, he really had a shot to go 11 for 11 with another touchdown.”

Watts went on to hit Brian Pierce with two minutes to play in the first quarter to make it 28-0. Then CSM opened the second quarter with a scoring frenzy, finding the end zone three times in the opening four minutes of the period.

Following Freeney’s pick-6, Watts connected with Raymello Murphy on a 42-yard scoring pass, then found Jeremiah Patter for a 12-yard touchdown throw to make it 49-0 with 11:14 remaining in the half. Sanchez finished out the half with his second score.

CSM then turned to freshman quarterback Jerry Johnson, who made his collegiate debut by going the rest of the way with an 8-of-12 passing line for 64 yards and one interception.

The Bulldogs scored just once in the second half, with Atelea Tengei finding the end zone on a 1-yard run with 5:41 remaining in regulation.

“It was good to see the guys clicking and to see the chemistry that we’re building over the course of the season, where it will show up in all phases,” Tulloch said.

With the win, CSM finds itself in a four-way tie for first place in the Bay 6 Conference with two games to play. Laney, Diablo Valley and City College of San Francisco all have similar 2-1 records in conference play.

The Bulldogs now travel to Stockton to face San Joaquin Delta at McNair High School this Saturday. Kickoff is scheduled for 1 p.m. CSM then concludes its regular season Saturday, Nov. 12 at CCSF.

This entry was posted on Tuesday, November 1st, 2022 and is filed under Athletics, Football, Headline. You can follow any responses to this entry through RSS 2.0. You can leave a response, or trackback from your own site.