Bulldogs quarterback Richie Watts was 16-of-18 passing for 269 yards and threw six touchdowns, as College of San Mateo traveled to Stockton to take down San Joaquin Delta for a 44-0 victory. 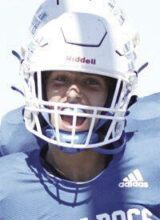 Over the past two weeks, CSM (3-1 Bay 6, 8-1 overall) has combined for 107 points, with 54 of them on scoring passes by Watts. The freshman out of Rocklin High School currently ranks third in the state with a 172.8 quarterback efficiency, and his 67.8 completion percentage ranks fourth.

CSM got on the board with two first-quarter touchdowns, with Watts connecting with sophomore receiver Reymello Murphy for both. Four plays into the game, Murphy hauled in a 50-yard scoring pass. After Delta went three-and-out, the Bulldogs turned right back upfield to convert on fourth-and-4 near midfield with Watts hitting Murphy for a 47-yard touchdown.

“It was man coverage,” Watts said. “It was just him and his guy. He did his thing, and his releases are something else. He was open. I was throwing to open guys.”

“We’ve got a bunch of guys in the receiver room and those guys are going to make you a play,” Watts said. “And there’s really no drop off.”

The Bulldogs defense closed out the day’s scoring on the opening play of the fourth quarter, when Delta, at its own 14-yard line, recovered its own fumble in the end zone.

CSM’s defense held Delta (0-4, 1-8) to 96 total yards of offense, while totaling seven tackles for losses, including five sacks. William Paden, Quincy Likio and Ian Langi each recorded their first career sacks, while Pau Reed added one sack, and Noa Ngalu and Dylan Neeley had a half sack apiece.

Freshman running back Atelea Tengei rushed for a game-high 35 yards on seven carries. The Bulldogs spread the ball around with five different running backs combining for 125 rushing yards on the day. The Bulldogs’ leading rusher on the season, freshman Ezra Moleni, totaled four carries for 27 yards.

With one week remaining in the regular season, the Bulldogs will travel to George M. Rush Stadium to face City College of San Francisco in a battle the Bay 6 Conference championship. Three teams enter Week 10 tied for first place in the conference ­— CSM, CCSF and Laney College — with Laney traveling to Chabot (1-3, 2-7) Saturday.

This entry was posted on Monday, November 7th, 2022 and is filed under Athletics, Football, Headline. You can follow any responses to this entry through RSS 2.0. You can leave a response, or trackback from your own site.