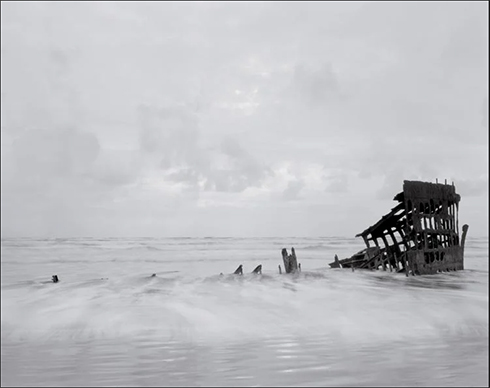 A photograph of the wreckage of the Peter Iredale, a steel ship that departed Santa Cruz, Mexico, bound for Oregon, and ran aground in 1906. Photo by Richard Lohmann.

A stunning exhibit of his black-and-white photographs showing at Canessa Gallery depict rotting dry docks and the bare bones of ancient shipwrecks. The photos tell a poetic story about a civilization that once made The City a thriving center for global trade and international transportation.

Lohmann talks Saturday afternoon about the origins of his project, which received ample support from the College of San Mateo, where he teaches photograph. If you want a healthy dose of Bay Area nostalgia, it’s the perfect place to be.

“My photos infer much about our economy today,” Lohmann said on a windy, rainy afternoon at Canessa Gallery, where he has just finished hanging and labeling more than a dozen of his large prints. “Our supply chains have been disrupted and our ports have been jammed. We no longer have longshoremen the way we once did. They’ve been replaced by truck drivers, crane operators and container ships. It’s a whole different ball game.”

Lohmann is a living breathing repository of Bay Area history and legend, and his photos tell a kind of ghost story.

Born in Belmont in 1957 and a graduate of San Francisco State University with BA in studio art and with an MA in photography, Lohmann worked for Don Worth, one of his instructors, and later with Rondal Partridge, a photographer in his own right and the son of Imogen Cunningham — renowned for her nudes, portraits of famous people like Gertrude Stein and Martha Graham and images of an American industrial world that was fast fading.

Lohmann’s life took an about-face when he enrolled in a class at S.F. State called “Art and Labor.” He learned about the longshoremen who worked with their hands during the day, belonged to the Waterfront Writers Association and at night crafted poems and short stories. The class led Lohmann to San Francisco Bay where, he says, he “fell in love” with ships and docks and the whole working landscape that he calls “the maritime world.”

Growing up in Belmont, he had no contact with artists, except for an electrician named Buzz Taylor who created sculptures from chunks of redwood. “If he could do it, I thought that maybe I could be an artist, too,” Lohmann said.

As a boy in suburbia south of The City, he loved to look out at the bay. Years later, he took up sailing, and entered the world he had admired from a distance. In the bay and on the bay, he explored the watery wild and discovered abandoned vessels and the detritus of disasters at sea and near the shore, some leaking toxic chemicals, an environmental disaster he helped to mitigate.

The wrecks and the relics prompted Lohmann to conduct research about the history of ships such as the S.S. Garden City, a ferry that made hundreds of journeys, beginning in the late 19th century and that carried thousands of travelers from the East Bay into San Francisco, until it was abandoned in the 1970s. A few of Lohmann’s photos in the exhibit at Canessa depict people, though they are more like shadows than real humans.

Early on, Lohmann made a decision not to photograph people. “I was interested in the maritime landscape devoid of humans,” he says. For the whole decade of the 1980s, he adhered to that decision. His work is a testament to his dedication and to a world that once throbbed, hummed and roared.

This entry was posted on Tuesday, November 15th, 2022 and is filed under Art, Community, Headline. You can follow any responses to this entry through RSS 2.0. You can leave a response, or trackback from your own site.