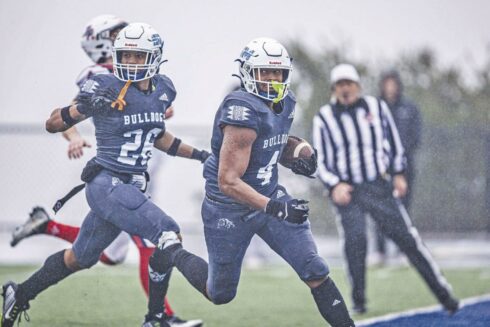 It was bound to happen.

The College of San Mateo offense, which had been humming along for the last four weeks, was bound to suffer some hardship and it came in the first half of the CCCAA Northern California championship game as the top-seeded Bulldogs struggled to find a rhythm against third-seeded American River College in San Mateo Saturday afternoon.

Fortunately for the Bulldogs, the defense continues to play at a championship level. That enabled the CSM offense the time to figure things out. The Bulldogs’ offense finally came around in the second half as the Bulldogs pulled away for a 30-5 win to advance to their fourth state championship game in program history.

CSM’s defensive unit completely shut down the Beavers, holding the ARC offense to just three points and 32 yards of offense — for the game. CSM finished with six sacks that took 45 yards off the ARC total and forced three turnovers, two of which led to touchdowns.

“The defense controlled the game from start to finish. Guys up front just absolutely controlled the line of scrimmage,” CSM head coach Tim Tulloch said. “That’s (a) dominant, dominant performance. You’ve got a chance in every game if you play defense like that.” 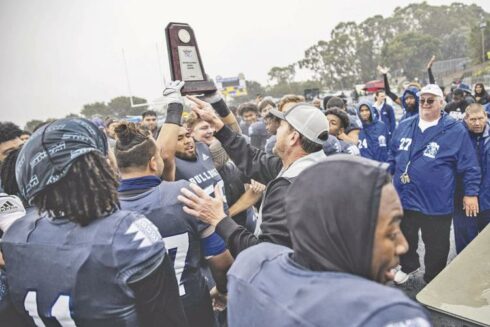 With the win, CSM (11-1), ranked No. 3 in the state, will host top-ranked Riverside (12-0) in the state championship game Saturday at noon. Riverside beat Fullerton 31-17 to advance to the title game.

To put the Bulldogs’ defensive effort into perspective, look no further than the postgame honors. Nose tackle Noa Ngalu, a 2019 Menlo-Atherton graduate who transferred to CSM from University of Washington, was named Defensive Player of the Game after recording a team-high seven tackles, including two sacks.

The game’s Most Valuable Player award went to CSM linebacker Taniela Latu, a 2017 Serra grad, who finished with six tackles and scooped-and-scored on a 19-yard fumble return to put the Bulldogs up 30-5 with 8:53 to play.

And the Bulldogs needed the defense to carry them early as both offenses struggled with the foggy, drizzly conditions that descended on CSM’s College Heights Stadium. The slick ball and lack of visibility took its toll and it affected the game right away. On the first play from scrimmage, Moye Messiyah’s snap sailed over the head of CSM quarterback Richie Watts that resulted in an 18-yard loss back to the CSM 4-yard line. Two plays later, Ezra Moleni took a swing pass in the end zone and was taken down for an ARC safety less than a minute into the game.

Forced to punt on their second drive, Caleb Ojeda’s punt was blocked and recovered by the Beavers at CSM 18.

But the Bulldogs defense stood firm, limiting ARC to a 36-yard field goal for a 5-0 lead with 6:16 left in the first quarter.

The rest of the half was essentially played blind. At one point, the scoreboard was completely obscured by the fog. Receivers seemed to be guessing where the ball would be as passes came out the fog, resulting in a number of drops for both teams. Watts and his ARC counterpart, Kenneth Lueth, combined to complete 9 of 22 passes for 73 yards. The teams combined for a total of 108 yards in the opening two quarters.

“(The weather conditions) put a lot of pressure on the passing game and the kicking game. The passing and kicking games were compromised. A snap went over the head of Richie. … They got a safety,” Tulloch said. “But as the game got on, we got better and better and in the second half, we were much cleaner.”

CSM finally found an offensive rhythm on its final drive of the first half. Starting at the 36, the Bulldogs drove the field, benefitting from late-hit and defensive pass interference penalties. On first down, Moleni went into the end zone from 5 yards out to give CSM a 6-5 lead at halftime.

Moleni, who had 2 yards of rushing going into the final drive of the half, picked up 17 on the drive which set the tone for the second half as he finished the game with 140 yards of offense — 111 rushing and two touchdowns on 21 carries and 29 more on two receptions — earning Offensive Player of the Game honors. 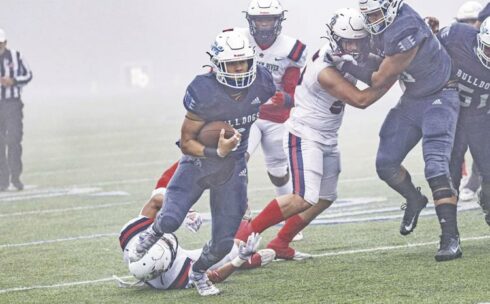 CSM running back Ezra Moleni runs the ball on the foggiest of days at College Heights Stadium in Saturday’s Nor Cal regional championship game. Photo by Patrick Nguyen.

The fog mostly cleared out to start the second half and it was a different game. While the CSM defense held ARC (8-4) in check, the Bulldogs offense finally got going.

Wells threw an interception on CSM’s first drive of the third quarter, but the defense got the ball right back on the next play when Malik Johnson came off the left end and blew up Lueth, jarring the ball loose and recovering the ball at the ARC 6.

Two plays later, Moleni banged into the end zone from a yard out to put the Bulldogs up 13-5.

“In big games, if you can answer a score with a score … or able to answer a turnover with a turnover, it gets the momentum right back,” Tulloch said.

After another Beavers punt, the Bulldogs had to settle for a 38-yard field goal from Gabe Plascencia for a 16-5 advantage. Watts threw his only touchdown pass two drives later for CSM, culminating a seven-play, 57-yard drive with a 7-yard scoring toss to tight end Brendan Doyle.

The defense put the exclamation point on the win when, following a sack from Marcellus Eison for a 12-yard loss, Sione Laulea blew up an inside reverse, forcing a fumble that was scoop up by Latu and taken to the house from 19 yards out for the final score of the game.

“We knew we were going to score at some point. We had missed on some throws. We had to make some adjustments in the run game. … There were opportunities and things were there, we just didn’t hit them,” Tulloch said. “We just stayed the course. We were going to be OK. As long as the defense was playing the way they were, we certainly had a chance.”

The Bulldogs will now get a chance to avenge their 2019, 31-14 state championship defeat at the hands of Riverside. This is the fourth state title game appearance for CSM, which are still searching for its first state title.

This entry was posted on Monday, December 5th, 2022 and is filed under Athletics, Football, Headline. You can follow any responses to this entry through RSS 2.0. You can leave a response, or trackback from your own site.