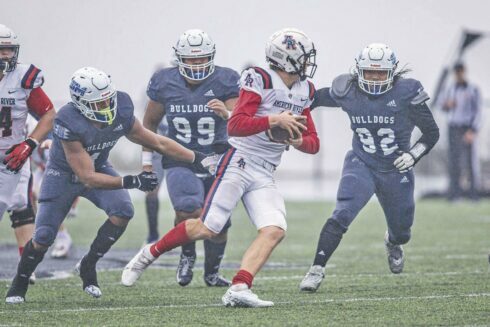 One could not ask for more when Riverside City College makes the trip north to face College of San Mateo in the California Community College Athletic Association state championship football game. The game features the state’s best offense, Riverside, against CSM’s top-ranked defense.

The Bulldogs host the Tigers at noon Saturday.

Riverside (12-0) has shown it can win in a variety of ways on its way to an undefeated season thus far.

Shootouts? The Tigers check that box as well. They held off College of the Canyons, 31-28 and needed three overtimes to get past Mt. San Antonio College, 35-33.

The game is a rematch of the 2019 state title game, a 31-14 Riverside win. When the CSM coaching staff looks back on that 2019 loss, the coaches wonder what might have been as a 21-point second quarter carried the Tigers to the victory. Even more concerning was Riverside made the Bulldogs a one-dimensional team as the Tigers held CSM to just 64 yards rushing.

The similarities between the 2019 CSM team and this season’s edition is uncanny. Like that 2019 team, the CSM defense has been dominant — especially in the playoffs. The Bulldogs allowed an average of 11.6 points during the 2019 regular season and shutout both Fresno and Modesto in the playoffs.

Not coincidentally, CSM’s best play of the season has come in the last five games — since the Bulldogs’ 23-21 loss to Diablo Valley Oct. 21.

There will be one aspect to Saturday’s championship game that neither team can control — the weather. The forecast calls for rain Saturday at College Heights Stadium, the second week in a row the Bulldogs will be playing against not only the opponent, but also the conditions.

The CSM offense struggled in the first half last week, but it was fog, not rain, that impeded the Bulldogs’ progress. When the fog cleared, the CSM offense clicked. Saturday will be the first rain game of the year for Riverside.

That could impact a Tigers team that is racking up nearly 600 yards of offense per game, averaging 390 yards passing and 200 yard rushing per game. Sophomore quarterback Jake Retzlaff, who prepped at Centennial High School in Corona, one of the premiere public-school programs in the state, has thrown for more than 4,500 yards this season, with 44 touchdowns against 11 interceptions, and a quarterback efficiency rate of 173.4.

Retzlaff is also the Tigers’ second-leading rusher, having run for 485.

Reggie Retzlaff, Jake Retzlaff’s older brother who is also a sophomore, is the Tigers’ leading receiver, averaging more than 100 yards receiving per game. He is Riverside’s big-play receiver. He’s caught 19 touchdowns and averages more than 18 yards per catch on his 69 receptions.

The Riverside run game is led by freshman Bryce Strong, who is averaging just 61 yards per game. But the Tigers use a running-back-committee approach that averages 6 yards a carry.

The Riverside defense, which had 86 tackles for a loss and 35 sacks, has struggled stopping teams at times. Riverside is allowing 21 points per game, but has given up 30 points or more in four games this season.

CSM counters with an offense that is averaging just under 380 yards per game and the Bulldogs could not be more balanced. They are averaging 186 rushing and passing per game. Freshman quarterback Richie Watts has been a model of consistency this season. While he has thrown for just over 2,100 yards, he has 20 touchdown passes against just two interceptions.

Ezra Moleni has handled the bulk of the running game, rushing for 1,168 this season, averaging just under 100 yards per game.

The CSM defense has been just as dominant as Riverside’s. The Bulldogs have 81 tackles-for-loss, led by sophomore linebacker Malik Johnson, who has 12. Taniela Latu is CSM’s leading sacker, with seven through 12 games.

This entry was posted on Friday, December 9th, 2022 and is filed under Athletics, Football, Headline. You can follow any responses to this entry through RSS 2.0. You can leave a response, or trackback from your own site.