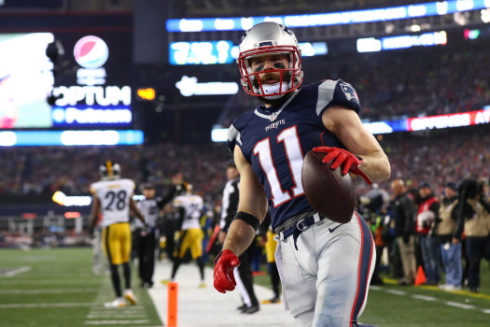 Julian Edelman #11 of the New England Patriots reacts after his touchdown against the Pittsburgh Steelers during the third quarter in the AFC Championship Game at Gillette Stadium on January 22, 2017 in Foxboro, Massachusetts. (Photo by Al Bello/Getty Images)

Regardless of what happens in Super Bowl LII, there’s a celebration awaiting Julian Edelman of the New England Patriots.

The longtime slot receiver will be inducted into the College of San Mateo Hall of Fame on Feb. 9. Edelman is scheduled to attend the event as part of an 18-member class that also includes Giants broadcaster Jon Miller.

Edelman tore an ACL during the preseason and will not play against the Philadelphia Eagles on Sunday. But teammates say the two-time Super Bowl winner remains engaged in preparations. “He’s a huge inspiration to me and all of our teammates,” Patriots receiver Danny Amendola told reporters in Minnesota this week. “He’s a leader, and we miss the hell out of him.”

Edelman was a standout option quarterback at the College of San Mateo after graduating from Woodside High. He threw for 1,312 yards and 14 touchdowns as a freshman and ran for a school record 1,253 yards and 17 touchdowns. Edelman went on to set passing records at Kent State before the Patriots took him in the seventh round of the 2009 draft.

Edelman has thrived in New England, while teaming with Tom Brady, a San Mateo native who often practiced at CSM with his personal quarterbacks coach, Tom Martinez. 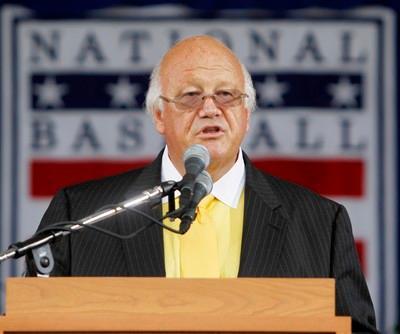 Jon Miller did football, basketball and baseball broadcasts for the CSM campus stations in the early 1970s. (AP Photo/Mike Groll)

Miller, entering his 22nd season as the voice of the Giants, began his broadcasting career as a student at CSM in the early 1970s. He did football, basketball and baseball games on KCSM, the college’s radio and TV stations, in the early 1970s.

Other honorees at the on Feb. 9 event are:

— If you’re going: The Hall of Fame Plaza inductee unveiling ceremony at 4 p.m. is free and open to the public. Tickets to the 6 p.m. dinner event are $75 and available at http://collegeofsanmateo.edu/halloffame/

This entry was posted on Thursday, February 1st, 2018 and is filed under Alumni, Athletics, Awards, Baseball, Basketball, Community, Events, Football, Headline, Softball, Swimming, Track & Field. You can follow any responses to this entry through RSS 2.0. You can leave a response, or trackback from your own site.