Matt Ta’ufo’ou, a former CSM linebacker who went on to play for Iowa State for three seasons, was hired in April 2018 to coach the outside linebackers at Cal Poly.

Matt earned 81 tackles as a freshman at College of San Mateo before taking his talents to Iowa State. He played in two games in 2009, was limited by injury to five games with two starts in 2010, notching 20 tackles, and played in 12 games with six starts as a senior in 2011, finishing with 72 tackles, four for loss.

Matt also posted a career-high 10 tackles against both Rutgers and Texas A&M and recorded eight stops in victories over Iowa and Kansas. He played in the Pinstripe Bowl in 2011 at Yankee Stadium as the Cyclones lost to Rutgers 27-13. 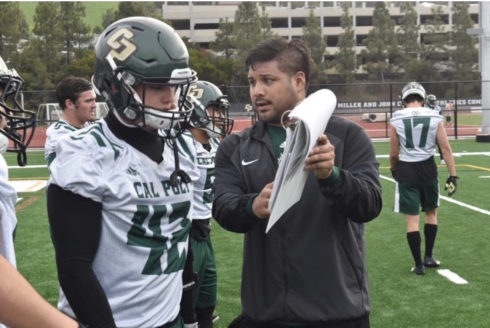 This entry was posted on Wednesday, April 25th, 2018 and is filed under Alumni, Athletics, Football, Headline. You can follow any responses to this entry through RSS 2.0. You can leave a response, or trackback from your own site.