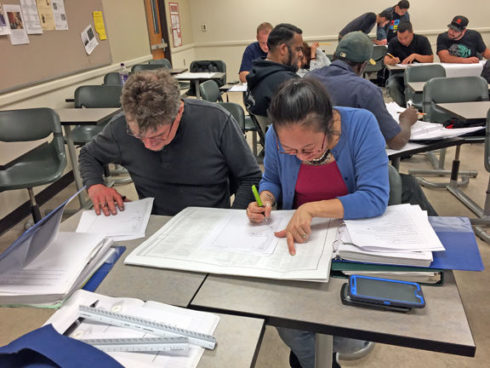 On Wednesday and Friday nights at the College of San Mateo, it’s not uncommon to see students gathered in a classroom and focused on building a wide range of skills, from sharpening their math to understanding team dynamics.

With speakers representing the electrical, plumbing and sheet metal industries, among others, and classes aimed at introducing students to the reality of construction job sites, those participating in the county’s Trades Introduction Program, or TIP, have a packed schedule in each of their nightly sessions.

It’s one of the reasons starting the class on time is so important, said TIP instructor Dan Pasini. But it’s not the only one — having worked as an electrician for more than 20 years, Pasini knows how important it is in the trades to arrive at job sites on time and is prepared to dismiss students from the program if they arrive late or miss class more than once.

“I run the class … and I run that like a job site,” he said. “Being on time is a big thing. Tardy is anything past five minutes.”

In addition to introducing students to a variety of trades, Pasini, who is also International Brotherhood of Electrical Workers president for Local 617, is focused on ensuring they come away from the program with clear expectations as to the demands of being a plumber, electrician, plasterer, painter or sprinkler fitter, among other trades. Aimed at preparing students to apply for apprenticeship programs in a variety of trades, the 120-hour program has placed more than 140 students in union apprenticeships since it was started in 2014, said Pasini.

With a high volume of new construction projects in the county and many current union workers preparing for retirement, job opportunities with good wages and benefits are available for those joining the union workforce, said Rayna Lehman, director of AFL-CIO Community Services for the San Mateo County Central Labor Council, who noted that even with low unemployment in the county, many are struggling with the rising cost of living in the region.

“There’s still a lot of people who have a hard time making ends meet,” she said. “A career in union construction right now does represent a pathway to family self-sufficiency.”

Lehman acknowledged that for those earning minimum wage, a union construction job may carve a path toward financial stability, but noted many don’t know about these jobs or the training needed for them. Lasting from three to five years for most trades, apprenticeships offer students on-the-job training and a way to earn money while working toward a career in a given profession, said Lehman.

But they can be a big investment — both for those coordinating and participating in the apprenticeship program — and TIP gives students a chance to test which professions are the best fit for their skills and interests while also offering apprenticeship programs a pool of well-prepared candidates who are serious about their careers, she said.

Lehman said TIP coordinators work with a range of nonprofits and county departments to recruit a diverse set of students and spread the word about TIP’s benefits. She said the San Mateo Building Trades Council, San Mateo County Community College District, College of San Mateo, Bay Apprenticeship Coordinators Association and NOVA Workforce Board are represented in the program’s steering committee, and several construction apprenticeship programs have welcomed TIP graduates into their programs.

Though county supervisors approved up to $100,000 in Measure K half-cent sales tax funds toward the program earlier this month, Lehman said the program is also supported by a set of state and federal funds. Having submitted the request for funding, Supervisor David Canepa acknowledged the merits of preparing students for college, but said programs like TIP can offer residents another way to pursue high-paying jobs that are needed in the county. For workers who are earning $15 an hour, college degrees may not be affordable or make sense for their interests and skills, noted Canepa, who said the jobs TIP prepares students for can be a gateway to higher salaries and benefits.

“These particular jobs, there’s a need for them,” he said. “These high-paying jobs give San Mateo County residents the opportunity to now live and work in their county.”

Having seen dozens of students begin the program looking for a job and graduate five months later with a better understanding of the lifelong career available to them in the trades, Pasini said he has enjoyed seeing TIP graduates progress years after they finish the program. He said seeing the program’s earliest graduates enter their fields and even overlap on some job sites has been validating for them, not only to see their careers have progressed but also to become part of a collaborative team of union workers in the county.

“They don’t just walk out of there feeling prepared to apply for apprentice,” he said. “They also understand they’re joining a movement.”

This entry was posted on Monday, November 26th, 2018 and is filed under Careers, Community, Headline, Programs. You can follow any responses to this entry through RSS 2.0. You can leave a response, or trackback from your own site.