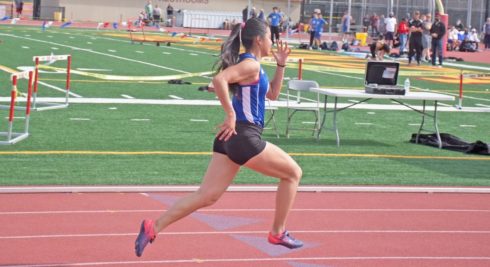 Yan-Jun ‘Sophie’ Liao, a two-time national high school champion in her native Chinese Taipei, the top qualifier in both the 100 and 200 at the Coast Conference championships. Photo by CSM Track & Field.

After moving 6,400 miles from her native Chinese Taipei, collegiate freshman Sophie Liao is now sprinting toward her future 100 meters at a time.

Having grown up in Taipei City, Yan-Jun “Sophie” Liao relocated to Foster City late last year for the opportunity to further an already prestigious amateur track and field career. As a freshman at College of San Mateo, she has certainly done that, having emerged as one of the greatest sprinters in the history of the women’s program. 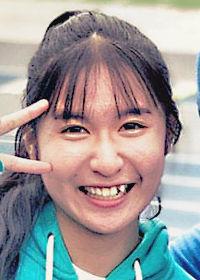 This she’s done while learning English on the fly.

When she took her Test of English as a Foreign Language exam last December — a requisite for community college admittance — she was studied enough to pass the written exam, despite only ever spoken her native Mandarin. Liao said she didn’t have her first conversation in English until after being admitted to CSM when she arrived at College Heights Stadium for her first day of track practice in January.

“I can understand a little bit what they’re talking about,” Liao said. “But it was tough to speak because I didn’t know how to speak. … It’s much better now.”

While she has proven a quick study and has already developed as a bright English conversationalist, Liao — which translates to “chat” in English — has never had a problem with letting her legs do her talking for her.

As a 100- and 200-meter specialist, Liao was a two-time junior national champion in both events at Lishan Senior High School in the Neihu District of Taipei City. Now, at age 20, she will have a chance to add to her accolades after qualifying for the finals of the women’s 100 and 200 at the Coast Conference championships Saturday at De Anza College-Cupertino.

Liao’s qualifying time in the 100 at Wednesday’s Coast Conference trials was 11.78 seconds, the fastest time of the day. It’s nearly a second-and-a-half shy of her personal record of 11.64, a time she recorded in high school. After taking two months off from training last fall, she has been rebuilding toward her potential top speed.

“I had to start all over again,” Liao said.

It has been four months since she took up training again, this time under CSM coach Kajari Burns. In his second year as the Bulldogs’ sprint, hurdles and jumps coach, he has helped fine-tune Liao to again contend as a two-event Coast Conference champ. In addition to the 100, she qualified in the women’s 200, also with Tuesday’s best time, of 24.89.

“From my perspective, with the limited training time (this year), she did well,” Burns said.

Liao doesn’t share her coach’s appraisal, downplaying the times she has recorded this season. She started the year running the 100 in the 12.3 range, a time she averaged when she was in middle school. She has improved substantially. Tuesday she recorded her season-best of 11.78 despite a stumble off the blocks. It also marks the second fastest time in the history of the CSM women’s program.  The top mark belongs to Rhonda Robinson, set in 1983, of 11.63.

Liao has never in her life recorded that time.

That quiet confidence took a substantial hit last August at the Asian Games in Jakarta-Palembang, Indonesia. Competing for Chinese Taipei, the then 19-year-old — running in the midst of mostly 20-somethings — fell short of qualifying for the finals. With the top eight finishers moving on, Liao placed ninth in the trials, finishing one one-hundredth of second behind the eighth qualifier.

“I just wanted to start over again and forget that,” Liao said. “That was my first experience. I was emotional at the time but, a few days later, I felt better.”

With the next Asian Games slated for Hangzhou, China in 2022, Liao will be one of those 20-somethings the next time around. She’ll turn 24, to be exact, in the midst of those games three years from now.

In the meantime, Liao is weighing her immediate collegiate future. While she has one more year of community college eligibility remaining, there is a good chance she could be one-and-done at CSM. This time next year, she could very well be competing at the NCAA Division I level. Liao said her decision of when to transfer is uncertain.

“The offers are coming in,” Burns said. “A lot of coaches are impressed.”

Liao expects to run at least one more meet at College Heights Stadium, though. That, she anticipates, will be at the California Community College Athletic Association State Championships, to be hosted by CSM, May 17-18.

Burns is radiating optimism about Liao’s potential CSM swan song — and beyond. He said her best race of the season on March 16 at Sacramento State University’s Hornet Invite showed what she could do against top-tier competition. While Liao settled for 10th place in the women’s 100, it marked the first time this season she cracked 12 seconds with a time of 11.92.

Not to mention the caliber of talent Liao ran against in the open invitational — meaning all collegiate levels, from Division I to community colleges, were represented — including four of the top-nine finishers in front of her in the 100 running for UC Berkeley, and one, who topped Liao’s time by three one-hundredths of a second, for Stanford.

“That’s when she really seems to shine,” Burns said. “Like most athletes, she needs the best around her in order to shine. And at state, she’s going to have that.”

This entry was posted on Saturday, April 27th, 2019 and is filed under Athletics, Headline, Track & Field. You can follow any responses to this entry through RSS 2.0. You can leave a response, or trackback from your own site.