After losing only two games during the regular season and putting together a 36-game winning streak, the College of San Mateo softball team saw its season come to an end with back-to-back losses in the state tournament.

After having their winning streak snapped with a 3-1 loss to Mt. San Antonio in the winner’s bracket final Sunday, the Bulldogs were eliminated in the elimination bracket final, falling 3-1 to Palomar Monday afternoon in Bakersfield.

Palomar continued its trend of scoring in bunches. In the Comets’ tournament opener against San Jose, they scored four runs in the first and six in the second on their way to an 11-3 win. In their elimination game against San Joaquin Delta in a game earlier Monday, the Comets scored five of their six runs in the bottom of the fifth in a 6-4 win to set up the meeting with CSM. 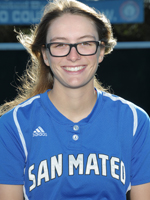 The Comets scored all three of their runs in the bottom of the fifth against the Bulldogs, coming up with five straight two-out hits while sending nine batters to the plate. A Sarah Fisher triple to center drove in Jillian Zamora to tie the game and Megan Wachholtz followed with an RBI single to left to plate the go-ahead run. Kendall Kates followed with an RBI double to round out the scoring for Palomar.

That proved to be enough for Palomar starting pitcher Allie Hughen, who after allowing a CSM run in the first, held the Bulldogs in check the rest of the way. Hughen scattered five hits in the complete-game victory.

CSM (43-4), the No. 1 ranked team in the state in the final poll of the regular season, took a 1-0 lead in the top of the first when Riley Donovan and Amanda Ubois-Weitenhagen drew back-to-back, two-out walks. Ally Sarabia followed with an RBI double to the left-center field gap. The Bulldogs had plenty of chances to add on early, but Hughen stranded six CSM base-runners through the first three innings. Aubrie Businger, Emily McAdams, Ubois-Weitenhagen, Sarabia and Katilyn Grech each had hits for the Bulldogs.

McAdams took the loss in the circle, working 4 2/3 innings, giving up three runs on seven hits. Grech came in a worked the final 1 1/3, allowing one hit and walking two.

Palomar (41-9) moves into the championship series against Mt. San Antonio, which is unbeaten in the tournament. Game 1 is at 11 a.m. Tuesday, with an if-necessary game 45 minutes at the conclusion of the first. Mt. San Antonio will need to be beaten twice to be denied the title.

CSM has now made seven straight appearances in the state championship tournament.

This entry was posted on Wednesday, May 22nd, 2019 and is filed under Athletics, Softball. You can follow any responses to this entry through RSS 2.0. You can leave a response, or trackback from your own site.