The article below originally appeared in the San Bruno Patch and is being reprinted with permission. 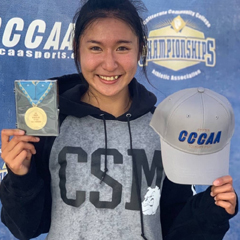 Freshman Yan-Jun (Sophie) Liao was the women’s sprint star in the rain on Saturday. She blasted out of the starting blocks to take a decisive victory in the 100 meters in a state season best 11.65 (with a legal 1.2 meters per second aiding wind). The Chinese Taipei native flew off the curve to win the 200 going away in 24.64, although hampered by a 1.5 mps headwind.

Challenger Kierra King of Cerritos, who came in as the favorite with some strongly wind-aided marks, was a distant second in both races – with respective times of 11.91 and 25.10.

Liao has a wind-legal season best in the 200 of 24.41, set in winning the Coast Conference championship, which ranks No. 2 in the state to King’s 24.15 legal best time. 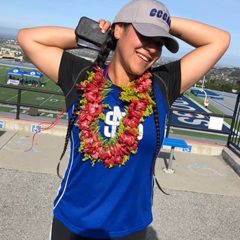 The Lady Bulldogs also had an impressive field event winner on Friday, Taina Livai, with a state-leading javelin throw of 134 feet, 2 inches. She is the only California Community College athlete to surpass 40 meters this season. And she did it twice on Friday.

The sophomore out of Mills High School (Millbrae) extended her state lead to 40.81 meters (133 feet, 10 inches) on her first effort to take control. She stretched that to 40.90 (134-2) on her third effort – which ranks No. 2 nationally among all community college throwers. Silver medalist Hannah Katches of Cuesta was more than six feet back at an even 128 feet.

Livai was also a finalist in the women’s shot put on Saturday, where she finished 12th at 34-10 1/4.
Freshman Teme Fanguna was the top CSM scorer there, finishing fifth at 38-4 3/4. Fanguna placed 12th in the discus at 83-11, finding it difficult to connect in the very wet throwing circle. The Mercy (Burlingame) grad ranks eighth in the state season with a best of 129-6.

Coast Conference men’s shot put champion Elijah Folau managed to get into the top nine with a 45-11 1/4 effort on his third put, following a pair of fouls. But the freshman from Serra High could not improve on his final three efforts in the rain. San Mateo’s highest male scorer was freshman Quincy Daniels (Serra) in the javelin throw, placing sixth at 170-1 on Friday.

–Riverside City College won the men’s competition with 116 points, ahead of defending champ Mt. San Antonio (73). This was the fifth time since 2007 that CSM has hosted the state meet on its Mondo track facility.

–Webcasts of both days of meet coverage are archived on www.baosn.tv

ELEVEN SPORTS USA plans to air a delayed telecast of Saturday’s final 2 1/2 hours of the meet (which includes all three of Liao’s races)– at a time to be announced – on its national cable outlets, which include DirecTV and AT&T U-verse.

This entry was posted on Saturday, May 18th, 2019 and is filed under Athletics, Headline, Track & Field. You can follow any responses to this entry through RSS 2.0. You can leave a response, or trackback from your own site.