No one has slugged it better than the Lady Bulldogs this season.

The College of San Mateo softball team powered their way to the No. 1 ranking in Northern California by leading all California community colleges in slugging percentage (.575) and runs scored (tied with 353). 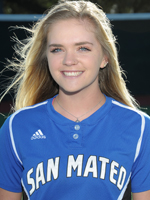 It was the arm of Emily McAdams, however, that delivered the Bulldogs to the state championship tournament for the seventh straight year.

McAdams earned wins No. 29 and 30 in the California Community College Athletic Association Super Regional playoffs by whirling two consecutive shutouts against College of the Sequoias. And to add mystique to the excellent performance, the sophomore right-hander out of Sequoia led CSM to 1-0 finals in each Friday’s and Saturday’s victories.

CSM scored its only run in the bottom of the sixth when Kaitlyn Grech singled home Avery Revera with the game’s only run. Grech was 2 for 3 on the day and hit at a .500 clip (3 for 6) on the series. The sophomore out of Woodside is batting .385 on the season.

McAdams has proven one of the best arms in the state. Not only does she lead the state in wins, she ranks second with a 0.75 ERA. Friday, she surpassed the 200-strikeout plateau, just the sixth pitcher in the state to do so this year.

CSM opens play in the state championship tournament Thursday as the No. 1 seed from Northern California. The Bulldogs will take on Fullerton, No. 4 from Southern California, at 1:30 p.m.

The double-elimination spans through Sunday, with San Jose City, Sacramento City and San Joaquin Delta also representing Nor Cal. The other So Cal teams are Cypress, Mt. San Antonio and Palomar.

This entry was posted on Monday, May 13th, 2019 and is filed under Athletics, Headline, Softball. You can follow any responses to this entry through RSS 2.0. You can leave a response, or trackback from your own site.