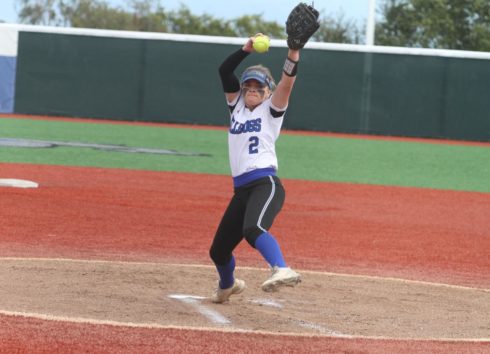 At 30-1, CSM pitcher Emily McAdams is the winningest pitcher in the state and her ERA of 0.75 is second. In her two seasons with the Bulldogs, McAdams has compiled a record of 47-3 with an ERA of 1.38. Photo by Daily Journal.

Nearly every high school baseball and softball team has a “guy” or “gal” — coach-speak for a player who would be good no matter how competitive their team was.

Emily McAdams was that player for Sequoia High School. A four-year varsity player, McAdams was a good high school player, who, while taking the game seriously, treated it just as that — a game.

Now, McAdams has developed into one of the best pitchers in the state. The sophomore at College of San Mateo is wrapping up her two-year stay with the Bulldogs with a second straight appearance in the state tournament and helped the program continue its string of state tournament berths to seven years in a row.

“She has a lot of great tools. She’s been a pitcher for a long time,” said CSM head coach Nicole Quigley-Borg on what drew her to McAdams during high school. “She just didn’t look like she had tapped into her full potential.”

Consider Quigley-Borg the brewmaster who taps into pitching talent. A former Capuchino and CSM standout who finished up her college career pitching for the University of Tennessee, Quigley-Borg knows how to get the most out of the talent she recruits to the Bulldogs.

McAdams had a vast amount of talent to tap. After a 17-3 campaign in 2018, McAdams turned into one of the most dominant pitchers in the state this season. She is the only pitcher to win 30 games this season and her 0.75 ERA was second among California community college throwers, while her 202 strikeouts ranks sixth.

But McAdams will not take sole credit for her success.

“My whole team has been a huge part of it,” McAdams said. “We couldn’t have done it if not all of us participated in all of it.”

She has a point. It has taken a total team effort to be 41-2 on the year, including a current 34-game winning streak, the No. 1 ranking in the state and possessing one of the top offenses in the state. The Bulldogs’ team batting average of .373 is third in the state and their 40 home runs — led by Amanda Ubois-Weitenhagen, whose 12 homers was tied for fifth in the state — is tops.

But when the Bulldogs needed a big-game performance, it was McAdams who stepped into the breach. She won a pair of 1-0 games over College of Sequoias in the Northern California Super Regional over the weekend, limiting the Giants to a total of seven hits over 13.2 innings, while striking out 12 — including 10 in the opener.

“She’s tough. She’s tough as nails. She didn’t look nervous at all. She looked comfortable in an uncomfortable situation,” Borg said. “She had to put us on her back and win [those games].”

It hasn’t always been that way for McAdams. She said she had never thought so much about softball as she has the last two years with CSM.

“Coming to CSM, a lot of things were put into perspective and lot of things I never thought about I’d have to think about,” McAdams said. “It’s been a lot of a mental game. It’s definitely made me a stronger person and player.”

That introspection is part of what makes McAdams so successful, that and her ability to receive instruction. Quigley-Borg said one of McAdams’ biggest attributes is her coachability. Not all players buy into what their coaches ask of them, but Quigley-Borg has had no such problems with McAdams.

“There have been numerous conversations between her and I over the last two years. We’re on the same page,” Quigley-Borg said. “She understood right from the start that she had to change and she had to be better. … She was coachable. She was willing to make adjustments. … There was full buy-in, which was awesome.”

To see just how malleable McAdams is as a softball player, her biggest adjustment wasn’t in the pitcher’s circle. It was at the plate where she transformed into a slap hitter — a batter near the top of the lineup who, while standing in the left-handed batter’s box, tries to slap the pitch to the left side of the infield and use their speed to beat the throw to first.

“I think Coach Borg really helped me wake up and realize that, yes, I can play (softball at a high level), but I needed to work hard at it,” McAdams said. “It is really because of Coach Borg how much I’ve changed since Sequoia.”

The Bulldogs will open the state tournament at 1 p.m. Friday against Fullerton (37-7), the No. 4 team from Southern California, at Bakersfield College. The start of the tournament, which was initially to begin Thursday, was pushed back a day due to impending storms that are supposed to batter Northern California for the next couple of days. That then pushes the state championship game to Monday.

This entry was posted on Thursday, May 16th, 2019 and is filed under Athletics, Headline, Softball. You can follow any responses to this entry through RSS 2.0. You can leave a response, or trackback from your own site.