By Nathan Mollat in Athletics, Volleyball 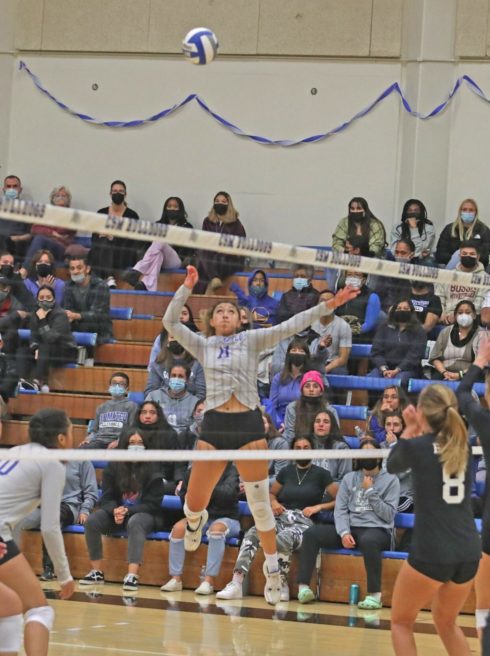 CSM’s Alister Borabo, a freshman out of Mercy-Burlingame, rises for an attack as the Bulldogs hosted Butte in the first round of the Nor Cal playoffs. Borabo and teammate Naomie Cremoux both finished with 18 kills to lead CSM to the four-set victory. Photo by Nathan Mollat.

The members of the College of San Mateo women’s volleyball team are Bulldogs — as in the school’s mascot.

But they also showed they have some “dawg” in them — an attitude that says, “Don’t mess with me.”

So there was Alister Borabo, a freshman outside hitter out of Mercy-Burlingame, staring down a Butte College player after putting away an attack.

There was Naomie Cremoux, a freshman outside hitter out of Los Altos, who was doggedly determined to beat the left side block, no matter how many swings it took.

And it was on display when setter Eyriana Eatmon, a sophomore from Rodriguez High in Fairfield, started high-stepping after her quick attack found the floor.

And when Valerie Bruk came off the bench, a freshman middle out of San Mateo, and came up with a block and kill late in the match, the crowd in the CSM gym went wild.

It all added up to 26-28, 25-14, 25-23, 25-6 win for the seventh-seeded Bulldogs in the first round of the California Community College Athletic Association Northern California playoffs over 10th-seeded Butte College.

“That’s part of the way we fuel each other’s fire,” CSM head coach Katie Goldhahn said. “[We] were amped — in a good way.” 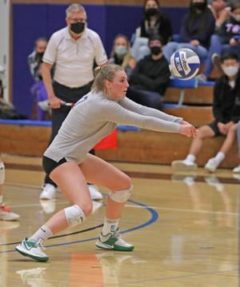 Tuesday, the Bulldogs showed throughout the match that they had the superior firepower — both Barabo and Cremoux finished with 18 kills on the night, while Eatmon was an assist machine, finishing with 55 — but Butte (17-7) showed it was more than capable of handling business if the Bulldogs left an opening.

Which they did in the opening set and happened again in set No. 3.

But when the Bulldogs took care of the ball, the Roadrunners were no match.

“We haven’t been a very good ‘first to 5 (points)’ team,” Goldhahn said. “That’s something we’ve been working on.”

The Bulldogs may need to brush up on those lessons as Butte jumped out to a 6-1 lead to start the match. But a pair of Roadrunners errors helped jump-start a 5-0 run. Cremoux had a kill off the left side, followed by a spike from Grace Thayer on right side roll and the Bulldogs were right back in the match, down just 7-6.

The two teams then went back and forth, with neither leading by more than a point or two. A Cremoux kill tied the game at 13 all before Butte took control by winning six of the next seven points.

Not even a referee overturn of a point in the Bulldogs’ favor paid off. Despite tying the match at 24-all, Butte eventually pulled out the 28-26 victory by winning the final three points.

In Game No. 2, however, the Bulldogs settled in. Butte stayed close early, but with CSM leading 6-5, the Bulldogs won five of the next seven points to grab the momentum.

An attack down the middle from Lolo Folau (freshman, Aragon) pushed the CSM lead to 16-8 before Butte made one final rally, winning three points in a row to close to 16-11.

But the Bulldogs finished on a roll, winning nine of the next 12 points to take the second set, 25-14.

The third set saw the errors creep back in for the Bulldogs and the Roadrunners took advantage by hanging around. With the scored tied at 23-all, CSM had already committed 10 errors in the set.

But they cleaned up their play just in time. Coming out of a timeout, CSM got to set point following a Butte hitting error and Breanna Evans (Freshman, Newark Memorial) closed out the set victory with a kill off the right pin for the 25-23 win and a 2-1 games lead.

In the fourth set, the Bulldogs simply overwhelmed the Roadrunners. CSM won three straight points to open the game and then, up 5-2, put the match away with a 10-0 that featured a little bit of everything: Cremoux with a kill down the line; three service aces from Folau; and three roofs from Grace Thayer (freshman, Palo Alto).

It culminated with an Evans roof to finish things off.

While Goldhahn was pleased with the play of Cremoux and Borabo on the outside, she was proud to see offense come from the middle as well.

This entry was posted on Wednesday, November 24th, 2021 and is filed under Athletics, Volleyball. You can follow any responses to this entry through RSS 2.0. You can leave a response, or trackback from your own site.