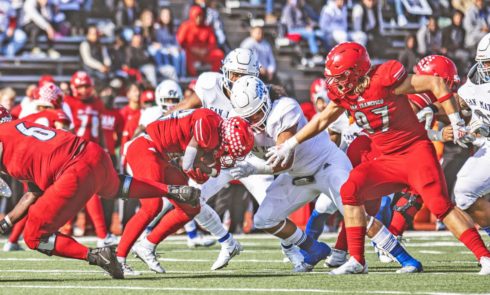 SAN FRANCISCO — One ill-fated pass spelled doom for the Bulldogs.

College of San Mateo (10-2) saw its season end Saturday, dropping a 20-17 heartbreaker to City College of San Francisco at George Rush Stadium — in what will stand as the final game of sophomore quarterback Luke Bottari’s community college career — in the Northern California regional championship game.

Bottari surpassed the 300-yard passing mark for just the second time in his career, completing 28 of 38 passes for 313 yards, two touchdowns and two interceptions. But CSM’s bid to return to the California Community College Athletic Association state championship game for the second consecutive postseason was denied by CCSF freshman safety D’Andre Greeley, who read an out-route intended for CSM receiver Mason Starling and picked off Bottari’s pass with 5:35 to play.

“I feel like as an offense, we came out and we balled,” Bottari said. “We were ready for everything they were throwing at us — all the blitzes, and all the cover disguises. Collectively, as an offense, I felt like we were good. We just didn’t finish.”

Trailing by 3, Bottari was driving the Bulldogs on their final possession of the day. His Superman dive at the end of a 4-yard scramble on third-and-4 moved the chains, giving the Bulldogs new life at their own 40. Two plays later, he completed a 13-yard pass to sophomore running back J’Wan Evans to move the ball across midfield for another first down.

But when Bottari tried to thread the needle to his favorite target Mason Starling — the sophomore receiver totaled seven catches for 103 yards and two touchdowns on the afternoon — Greeley, playing a Cover 2 zone, timed the well-placed throw perfectly for his state-leading ninth interception of the year.

“These are the best two teams in Northern California, and maybe the country,” CSM head coach Tim Tulloch said. “Luke did a phenomenal job leading our team for four quarters today. … On that specific play, [Greeley] just made a phenomenal play. That’s what it was. And when you get two really good teams, they’re going to make some plays, we’re going to make some plays. And on that specific play, you tip your hat to that kid.”

The Bulldogs, netting just 42 rushing yards, stayed with the aerial attack all day long. Not only is undefeated CCSF (12-0) the best run defense in the state, allowing a mere 53.9 yards per game on the year, both of CSM’s top running backs — Evans and sophomore Darrell Page — have seen limited action due to injuries during the postseason.

CSM was also without two of its top tacklers on defense in linebacker Demarii Blanks and safety Noah Rodriguez. CCSF outgained CSM in total yards 404-355.

“It’s been a blessing this entire season,” Blanks said. “This is my family right here. It hurts to not come out on top. But we worked hard, we worked a lot. We’re going to get it next year, so it doesn’t matter. But it just sucks to lose.” 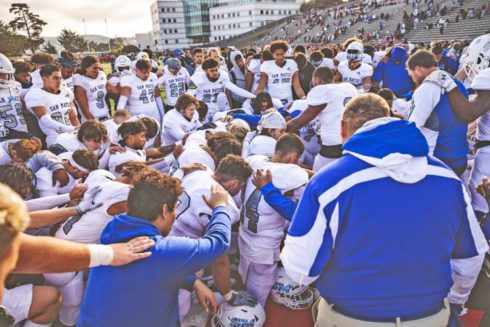 The 2021 College of San Mateo Bulldogs gather after the CCCAA Nor Cal championship Saturday at City College of San Francisco. Photo by Patrick Nguyen.

After a fast-paced first half, both teams’ defenses hunkered down after the break. With the game tied 17-17 at halftime, CCSF won the field-position game in the third quarter with an exchange of quick possessions.

On what was already the four series of the half, the Rams took over with 9:22 remaining in the third quarter, turning a deep Bulldogs punt into field position at the CSM 42. CCSF drove down to the 4 on a 16-yard completion from quarterback Jack Newman to freshman Max Rodarte. Then, after CSM freshman defensive backs Kairo Reid and Justin Sinclair dropped a third-and-1 pitch play for a 10-yard loss, CCSF kicker Nick Hill booted a 31-yard field goal that proved to be the game-winner.

CSM defensive lineman Noah Lavulo totaled six tackles on the day, including a game-high 2 1/2 tackles for losses, and one quarterback hurry.

“All the times I played these guys, I felt like I’ve left it all on the field,” Lavulo said. “They’re a good team, we’re a good team. … They gave us a good battle. … They took advantage of all the mistakes we made. Every time we made a mistake, they made sure they got a play out of it.”

CCSF didn’t need much time to set off the first-half offensive fireworks. On the fourth play of the day, Newman aired it out for a 56-yard touchdown to sophomore receiver Jeffrey Weimer (seven catches for a game-high 154 yards), who got two steps on his defender and broke free up the right side to take the pass in step, giving the Rams a 7-0 lead just over three minutes into the game.

After trading quick possessions, CSM joined the air show with a quick-tempo drive. With the Bulldogs backed up to their own 10-yard line, Bottari completed all five of his pass attempts, starting with a clutch third-down pickup on an 18-yard completion to Tre Hines out to the 22. After passes of 23 and 25 yards, Bottari found Starling in tight 1-on-1 coverage in the corner of the end zone for a 12-yard scoring pass to tie it 7-7.

CSM was 6 of 13 on third-down conversions, including 5 of 8 in the first half.

“That drive, I was just seeing their coverages really well,” Bottari said. “They did a great job disguising their coverages. We’ve been studying really hard all week just preparing for it, and it showed on that drive. So, we were ready for it.”

CSM and CCSF then traded field goals. Gabe Plascencia delivered a 47-yard field goal on the first play of the second quarter to give the Bulldogs a 10-7 lead. The Rams fired back with a 30-yard field goal by Hill to tie it 10-10 with 10:39 to play in the half.

Plascencia nearly continued the seesaw of field goals at the end of the next CSM drive. The sophomore initially hit a 33-yard field goal, but CSM opted to nullify it after CCSF was flagged for a personal foul penalty. The Bulldogs cashed in on the following play with Bottari connecting with Starling on an 8-yard scoring pass at the front of the end zone to give CSM a 17-10 lead.

But the Rams woke up on their following possession, starting with a critical third-down conversion from their own 16. Newman buried a crossing route over the middle to Daelin DeGraffenreid for a 14-yard pickup and a first down. The sophomore quarterback then aired out another third-down conversion to cross midfield, a 25-loft to Weimer to advance to the CSM 40.

Freshman running back Shawn Allen (10 rushes for a game-high 51 yards) then bounced off tackle for the Rams’ only rushing chunker of the day, a 30-yard pickup into the red zone. Two plays later, Newman connected with freshman Aaron Espero for a 10-yard touchdown to tie it 17-17.

Newman was 26-of-37 passing for 290 yards, two touchdowns and two interceptions.

“He gets off the ball quick,” Lavulo said. “This game was a little different — this was our second time playing them — so they kind of had a little game plan around me. They did better protecting him this time. But our D-line, our front, we did our best to get to him.”

The two teams played three weeks previous in the Bay 6 Conference regular-season finale, with the Rams taking the conference title with a 31-27 victory.

“Obviously I’m feeling super defeated right now,” Bottari said. “But at the end of the day, they played better than us. They executed when possible and they came out on top.”

This entry was posted on Monday, December 6th, 2021 and is filed under Athletics, Football. You can follow any responses to this entry through RSS 2.0. You can leave a response, or trackback from your own site.