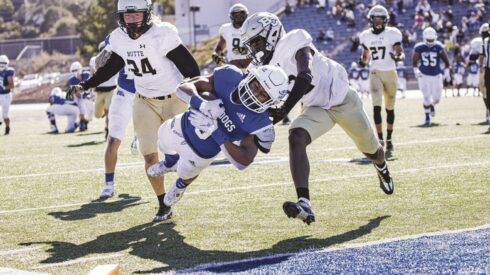 Northern California’s top community college football team, College of San Mateo (5-0), has its sights on new winning streaks as Bay 6 Conference play gets underway Saturday with No. 8 Laney-Oakland (4-1) visiting the No. 2 Bulldogs at 1 p.m.

CSM had two 24-game regular season and conference winning streaks heading into the 2021 league finale, which ended with a 31-27 last minute setback to eventual state and national champion City College of San Francisco. After four league titles, that prevented the Bulldogs from a 5-peat in the Bay 6.

San Mateo is 24-1 in the Bay 6 since a Nov. 14, 2015, setback against CCSF. The Bulldogs had not lost to another Northern California team since 2018, when Laney defeated the Bulldogs in the playoffs – also enroute to winning state and national titles. CSM had won their regular season league meeting.

San Mateo freshman quarterback Richie Watts leads the state’s National Division quarterbacks with the best passing completing percentage, 72.5 (66 of 91). He has thrown for six touchdowns with no interceptions for a spectacular 183.6 collegiate efficiency rating.

CSM sophomore running back Ezra Moleni is Northern California’s top National Division rusher, averaging 91.6 yards per game, and scoring a pacesetting seven TDs. He received state player of the week recognition after rushing for 171 yards on 19 carries (9.0 average) and three touchdowns in the Bulldogs final non-league win, 28-21, over then-No. 6 Butte, which is No. 10 this week and a favorite in the NorCal Conference.

Pacing the Bay 6 in all-purpose running are Moleni, with 112 yards per game, and J’Wan Evans (106.6). The CSM duo are the only players averaging more than 90 yards.

CSM linebacker Fynn Williams, a freshman out of Serra High, was selected Northern California Football Conference defensive player of the week for his performance against Butte: 11 tackles (9 solo), two key drive-ending sacks, another tackle for loss, and a QB hurry.

The Colts hosted Evergreen Valley in the conference opener Oct. 4 and scored a pair of second-half goals to pull out a 3-2 win. Giselle Gutierrez and Rachel Mull each had a goal and assist for Cañada, with Mull notching the game-winner off an assist from Yara Gomez-Zavala in the 89th minute.

Cañada was not as fortunate Oct. 7, falling 2-0 to Cabrillo, which scored once in each half.

Skyline closed out its non-league schedule Oct. 7, dropping a 2-0 decision to Foothill. The Trojans open Coast-North play on the road at Evergreen Valley-San Jose at 1:30 p.m. Wednesday and will host Las Positas-Livermore Friday at 12:30 p.m.

This entry was posted on Wednesday, October 12th, 2022 and is filed under Athletics, Football, Headline, Volleyball. You can follow any responses to this entry through RSS 2.0. You can leave a response, or trackback from your own site.