While unbeaten and unanimous No. 1 Riverside City College improved to 9-0 with a win over previous No. 5 Cerritos, the College of San Mateo continues to lead the way in Northern California.

In the north section, No. 4 College of San Mateo (8-1) matches 3-1 Bay 6 conference records at reigning state champion City College of San Francisco (6-3). The winner would likely win a co-title as sixth-ranked Laney (7-2), which is also 3-1, only needs to a win at Chabot (2-7) also claim a piece of the championship.

The conference champions from the three north section conferences earn automatic bids to the four-team regional playoff. American River (7-3), ranked ninth in the state, has already clinched the NorCal Conference championship and an automatic playoff bid. The winner of the No. 12 Fresno (6-3) and Modesto (4-5), will earn the Valley Conference title and the another automatic playoff spot. The Bay 6 champion will get the third bid and the fourth will be an at-large selection based on a team’s RPI — a power index.

A CSM win over San Francisco gives the Bulldogs the conference championship outright and an automatic bid to the playoffs. Even if CSM loses, the Bulldogs would still likely earn the at-large berth. Going into the final week of the season, CSM has the highest RPI rating in Northern California.

Riverside can clinch the Central Conference championship and the top seed in the Southern California playoffs with a win over last-place Chaffey.

No. 7 Cerritos (7-2) hosts No. 2 Mt. San Antonio (8-1) for second place and possibly the south’s at-large playoff berth. Saturday’s Southern League title decider has No. 3 Golden West (8-1) at No. 5 Fullerton (8-1), with the loser also in contention for the at-large state berth.

The southern section’s last conference — ironically named the Northern League — has all six teams with 2-2 conference records going into the final game, with a three-way tie a very real possibility. The team earning the tiebreaker is expected to be the lone Northern League team advancing to the four-team south playoffs. 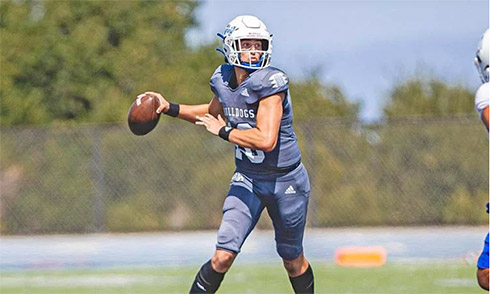 CSM freshman quarterback Richie Watts threw six touchdown passes and completed 88% of his passes (16-for-18) for 269 yards in a 44-0 win over Delta last weekend. Photo by Patrick Nguyen.

Bulldogs quarterback Richie Watts was the top passer in the state last week after throwing six touchdowns on 16-of-18 passing for 269 yards.

Dylan Camp, a Jefferson graduate and a freshman defensive back at San Francisco, picked off three passes in the Rams’ 38-14 win over Chabot last week, including a pick-6.

The battle of streaks will determine the 2022 Coast Conference women’s volleyball title on Tuesday, Nov. 15 at 6:30 p.m. in Aptos.

Host Cabrillo College has not lost a Coast volleyball match at home since 2007, winning 14 straight titles. The Seahawks are currently in second place in the Coast North at 7-1. The lone Coast setbacks since 2009 have come at College of San Mateo, in 2021 and 2022. The 2021 Bulldog triumph ended a 121-match Coast record winning streak.

CSM, currently ranked No. 3 in the state, brought a 13-match winning streak into the week (18-3 overall) – that includes two wins over defending state champion Fresno City College. The last setback came on Sept. 10 against current state No. 1 Feather River College. San Mateo came into the final week of league play with an 8-0 record, having won 21 of 23 sets in Coast play. That included a 3-0 sweep of Cabrillo at College Heights on Oct. 21.

College of San Mateo’s men’s basketball team swept all three games in the San Jose City College Tipoff Classic over the weekend, starting with a pair of cliffhangers.

The Bulldogs, ranked No. 16 in the state preseason poll, came back to defeat Feather River College, 75-71, in Thursday’s opener. They edged Merced, 112-109, in three overtimes on Friday; then finished with an easier 76-57 triumph over Lassen on Saturday.

Against Feather River, Justin Milch drained a 3-pointer with 21 seconds left to put the Bulldogs ahead, 73-71. Feather River failed to counter and then fouled, accounting for the final points.

In the Merced game, the Bulldogs trailed, 88-85, through the final minute of regulation before Shakur Blaylock drained a long 3-pointer from atop the key with one second remaining to knot the count. In the extra period, Malik Merchant’s corner three made it 93-all with 57 seconds left and sent it to another OT. Merchant drove for a lay-up with 13 seconds remaining in the second overtime to create a 101-101 tie, necessitating another 5-minute period.

CSM wasted little time taking the advantage in the third OT. Blaylock sank an uncontested three and followed up with a steal and lay-up. A driving jumper by Milch made it 108-101 with 2:50 remaining. Merced, however, battled back and stayed in contention until the end, closing to 112-109 with six seconds left, then creating a turnover and missing a long desperation 3-pointer at the buzzer.

CSM’s home opener at College Heights is on Saturday, vs. San Jose CC, at 3 p.m.

Tiare Novero-Paaga had 12 points, including two 3-pointers – plus six rebounds — to lead the opening 54-40 win over Monterey Peninsula. Jillian David added ten points, as the Lady Bulldogs outscored MPC, 33-17 in the second half in the Nov. 1 opener.

CSM next plays at the Monterey Peninsula Crossover on Friday, against Folsom Lake at 4 p.m., and on Saturday, against Allan Hancock, at 1 p.m.

Dan Luiseged scored in the 80th minute to give the Trojans the win, improving their record to 4-5-1 in Coast-North play and 11-5-2 overall

Cañada is closing in on the Coast-North championship, with games against San Francisco and Evergreen Valley left this week.

Skyline will look to finish at least .500. The Trojans go into their final two games against West Valley and Foothill with a 6-6-1 record overall, but just 2-5-1 in Coast-North play.

This entry was posted on Wednesday, November 9th, 2022 and is filed under Athletics, Basketball, Football, Men's Basketball, Volleyball. You can follow any responses to this entry through RSS 2.0. You can leave a response, or trackback from your own site.