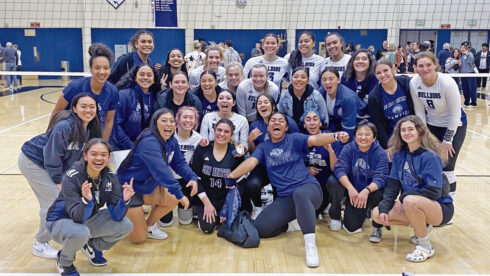 Members of the CSM softball team celebrate with women’s volleyball following their win over Cabrillo on Saturday. (Photo by The Daily Journal)

SAN MATEO – For the first time in program history, the College of San Mateo women’s volleyball team is headed to the state championships.

On Saturday night, the No. 4-seeded Bulldogs defeated No. 12 Cabrillo College 3-1 (25-17, 25-18; 24-26, 25-14) at home in the third round of the Northern California Regional Playoffs to secure their spot in the 2022 California Community College Athletic Association (CCCAA) State Championships.

Saturday marked the third meeting of the season between the two Coast Conference foes with CSM coming out on top of all three.

All-American Naomie Cremoux put together another solid match in helping lead the Bulldogs to the victory. She had a team-high 19 kills and added 12 digs.

CSM head coach Katie Goldhahn, who helped launch the women’s volleyball program at the college in 2016, has led the Bulldogs to their first Coast Conference championship this season as well as its first-ever appearance at the state tournament.

The Bulldogs will take a 22-3 overall record and 17-match winning streak into the state championships that are set to begin on Friday (Dec. 2) at Fresno City College in Fresno. CSM is the North’s No. 4 seed and will face South No. 1 Moorpark College in an opening-round match. Match time is TBA.

Moorpark is 17-4 overall this season after defeating No. 14 Rio Hondo College (3-1) and No. 11 Santa Monica College (3-1) in the Southern California Playoffs. The Raiders went 8-2 in the Western State Conference North Division to finish in second place.

Ticket prices for the CCCAA State Championships are $12 for general admission and $8 for all identified students, faculty, staff, senior citizens age 60 and over, and children under 12 years old. Tickets are available online in advance at the CCCAA tickets page. | TICKETS

All matches of the state championships will be streamed live online by BAOSN at https://baosn.tv

This entry was posted on Monday, November 28th, 2022 and is filed under Athletics, Headline, Volleyball. You can follow any responses to this entry through RSS 2.0. You can leave a response, or trackback from your own site.