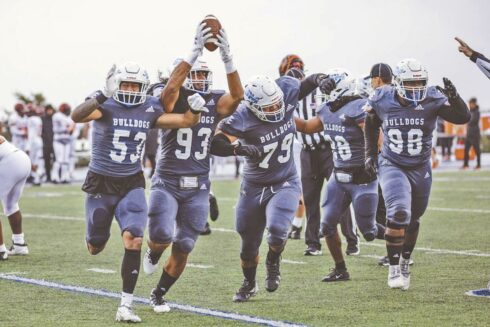 The dominant playoff run for the College of San Mateo football team is over — culminating with the Bulldogs first CCCAA state championship with a wipeout 55-0 win over previously unbeaten Riverside City College Saturday in San Mateo.

CSM (12-1) put on a master class of dominance on both sides of the ball. It was 7-0 after three plays and 14-0 after 10 plays as the Bulldogs ripped off huge touchdown runs. CSM scored 21 first-quarter points and continued to pile on.

Meanwhile the Bulldogs’ defense completely shut a Riverside offense that came into the game averaging 590 yards of offense per game. CSM forced five turnovers and the game was punctuated by a Kavika Baumgartner pick six in the third quarter.

It was as complete a game the Bulldogs have put together this season and it came in the program’s fourth state championship appearance.

“So proud,” CSM head coach Tim Tulloch said. “They worked so hard. They all made a commitment. No one sees how hard these guys work behind the scenes.”

CSM set a few records in the victory. The 55-0 final score was the largest margin of victory in the state championship game, dating to 1967. It was also the first title-game shutout since Fullerton’s 41-0 win over American River in that 1967 championship game. 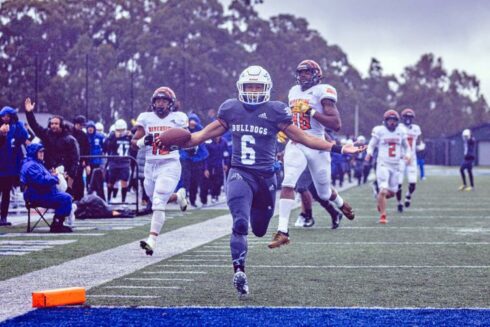 “Ever since losing (in the Nor Cal final) last season, our goal was to get payback,” Moleni said. “We made it.”

The dominance started and ended at the line of scrimmage, which the Bulldogs controlled on both sides of the ball. The offensive line opened gaping holes in the first two quarters as CSM built a 35-0 lead by halftime. CSM finished with 446 yards of offense, while the Bulldogs defense held the Tigers to just 224.

“After the DVC loss, it kind of humbled us,” CSM linebacker Taniela Latu said, who earned Defensive Player of the Game honors to go along with his game MVP from the Nor Cal championship game. Latu finished Saturday’s game with three tackles-for-loss, including a sack, and forced a fumble.

“We couldn’t get complacent.”

Riverside (12-1), known for a high-octane passing game that averaged more than 300 yards per game, had that part of its game grounded as the game was played in challenging weather conditions. The rain was blowing sideways at kickoff and the large American flag behind the scoreboard went missing midway through the first quarter. Both quarterbacks, CSM’s Richie Watts and Riverside’s Jake Retzlaff, looked like shot putters as they attempted to throw water-logged balls downfield.

“We knew weather would be on our side,” Latu said. “We know they’re air raid so we knew we just had to shut down their running game.”

With the win, the CSM defense completed a run of 12 straight quarters without allowing a touchdown. Through three playoff games, the Bulldogs allowed a total of 5 points

With the passing game relegated to the backseat, the game would be decided by which team ran the ball better.

“You just don’t know (how the game will develop) until you kick it off,” Tulloch said. “We’ve been hot. We hit the gas after the DVC loss. … This team was all gas.”

The Bulldogs dominated on the ground, grinding out 379 yards. On the third play of the game, Moleni took a toss left, went around the left corner and went 33 yards untouched for a quick 7-0 lead.

Riverside was forced to punt on its first possession, one of 11 on the day for the Tigers, and after another three plays, Moleni took a toss right, went around the right end and scooted 62 yards, again untouched, for a 14-0 lead with 9:57 left in the opening quarter.

CSM’s J’Wan Evans was the beneficiary of CSM dominant offensive line play on the Bulldogs’ fourth possession as they needed just two plays to cover 60 yards. Evans gained 18 yards on the first play and on the second, he also took a toss to the right and picked his way through traffic for a 42-yard touchdown and the rout was on.

“It was the same things we always do,” CSM offensive line coach Bret Pollack said, who has also served as the Bulldogs’ offensive coordinator and head coach during his time with the Bulldogs.

“We knew the game would come down to us controlling the line of scrimmage.”

Added Tulloch, who has also served as defensive coordinator during his CSM coaching career: “We’re an extremely physical football team and we hang our hats on a physical brand of football.”

At one point, the Tigers had nine players up on the line of scrimmage and they still couldn’t slow the Bulldogs. While neither team threw the ball much, CSM certainly was more efficient. The Bulldogs needed just one play to cover 33 yards late in the second quarter when Watts found tight end Brendan Doyle for a 33-yard scoring strike to put CSM up 28-0. Doyle earned Offensive Player of the Game honors, scoring a pair of touchdowns and helping the offensive line dominate with his blocking.

CSM added one more score with just over a minute left in the first half when Evans capped a two-play drive with a 67-yard bolt right up the middle, once again untouched, for a 35-0 lead at halftime. Evans finished with 148 yards and two scores on 14 carries.

Baumgartner’s pick six of 16 yards midway through the third quarter put CSM up 42-0. Kicker Gabe Plascencia added a field goal of 24 yards early in the fourth and backup quarterback Jerry Johnson found Doyle for a 22-yard score for the final points of the game.

“No one gave this to us. We earned it,” Tulloch said. “When I started here my first year, we hadn’t won a (conference) championship in a few years. … Each team between now and the last 25 years has had a hand in building the team that is here today.

“Our goal, at one point, was to just win a conference championship. Then it was, ‘Let’s see if we can win Nor Cal’ and we did that. We went to the state (championship) game, we lost a couple, but we got ourselves to the top two, three teams in the state.

“And now I see this where we take our game to number one in the state. Not two or three. But it’s a process and it doesn’t happen overnight.”

This entry was posted on Monday, December 12th, 2022 and is filed under Athletics, Community, Football, Headline. You can follow any responses to this entry through RSS 2.0. You can leave a response, or trackback from your own site.